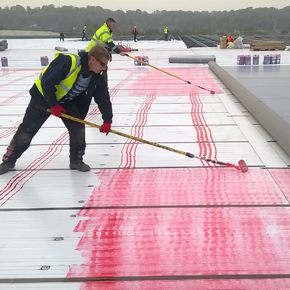 IKO Polymeric has delivered a bespoke roofing solution for one of the largest online grocery centres in the world.

Development began in September 2015 and was completed in December. IKO Polymeric delivered a number of solutions including bespoke roll lengths and specific membrane overlap positioning to meet the project’s tight deadline.

To reduce waste and installation time IKO Polymeric manufactured its Amourplan PVC single ply membrane in bespoke rolls of 22.35, 19.20 and 8.00 linear metres, as opposed to the standard length of 20 linear metres which would have to be cut and/or extended to fit the required dimensions.

To further cut installation times, IKO Polymeric manufactured half the rolls with the membrane overlap positioned on the opposite side to the other rolls. This 50/50 split meant that FK Group could use two teams operating simultaneously on either side of the ridge, rolling the membrane out in the same direction.

FK Group also developed a new technique for the project. By welding eight rolls together, the contractor was able to create a 320m2 membrane ‘blanket’, rolling half back and then applying IKO Polymeric’s PU adhesive to the area.

The new fulfilment centre for Ocado, the premium British online supermarket, is based in Erith, Kent. It will be operational in 2017, handling 200,000 orders a week and representing £185 million of local investment.