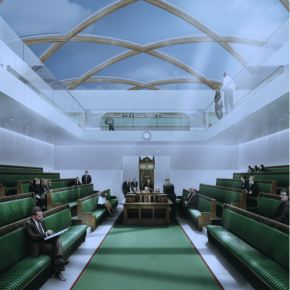 A first look inside Gensler’s temporary Parliament on the Thames

Conceptual interiors have been unveiled for the solution that will enable the renovation of the Palace of Westminster to be completed in less than six years. Find out more in ABC+D’s latest magazine.

International architecture, design and planning firm, Gensler has provided a first look inside its radical concept for a temporary Houses of Parliament on the River Thames.

The idea has been floated as a solution to enable a full decant of the Palace of Westminster to allow long overdue refurbishment works to proceed.

The internal architecture mirrors familiar features from the Palace of Westminster and is inspired by the magnificent hammer-beam roof of Westminster Hall.

The two iconic chambers of the House of Commons and House of Lords will be replicated to the same dimensions to ensure familiarity with the aim of reducing disruption to MPs and Peers. The Royal Gallery and Central Lobby, which play an important role in parliamentary traditions including state receptions and ceremonies, will also be reproduced in the temporary structure.

Built on a series of steel platforms, the building will be a dramatic, high-tech wooden framed structure covering 8,600m2. A light trough will run around the base of the chambers to enable a glow that will illuminate the building at night and the space between the outer bubble and inner box, known as the Inner Deck, will be filled with plants.

Skylights – another feature of the Palace of Westminster – will ensure the chambers are bathed in daylight while maintaining the privacy and safety of members. A basalt stone walkway will run between the structure’s exterior and the chambers, which will be clad in white painted metal panels that are both cost-effective and understated.

Overall, the inside of each chamber will be pared down to make the space as effective and flexible as possible. In order to keep the space column free, the mezzanine will be hung with steel tension rods from clear space beams above.

Light covers between the edge of the mezzanine and the perimeter wall will emphasise the ethereal quality of the space and create visual relief. Perforated wood panels with acoustic backing will provide sound absorption and will be finished in semi-gloss white lacquer to further create the impression of space and airiness.

The clean and simple interiors will use the same colour palette as Parliament’s historic home. As is traditional, green will be used for the House of Commons and red for the House of Lords with the familiar leather benches central to the design.

Philippe Paré, design principal at Gensler, said: “It is important that the design is true to the iconic interiors that people are so familiar with to ensure our concept is still recognisable as Parliament.

However, we wanted to give it a modern twist. Building a new structure from the ground up creates an opportunity to incorporate workplace design principles that are proven to improve productivity, well-being and collaboration. We have tried to maximise access to natural light, provided areas of planting to increase oxygenation and leverage the Inner Deck as a place where impromptu interaction and dialogue can occur.

“We are conscious that any solution enabling a parliamentary decant will use public funds, so we have focused on restraint and efficiency. We have also been sensitive to the Palace of Westminster, so that our solution continues to be recognisable as Parliament and to ensure the space is easy for MPs and Peers to adapt to and use. The simplicity of the interiors also gives the structure flexibility, which will be important for legacy use.”

Ian Mulcahey, managing director at Gensler, said: “In an uncertain world, The Houses of Parliament have proved to be an enduring symbol of stability and democracy. Their iconic status at the heart of Government is recognised the world over and by the many thousands of people who come to visit each year.

This concept powerfully expresses the necessity for the continuity of Government in this historic location in Westminster. The pressing need to refurbish the Palace of Westminster provides a unique opportunity for the UK to demonstrate its resilience and celebrate its design creativity.”

Gensler unveiled its concept for temporary Houses of Parliament located on the River Thames in October 2016.

The proposed modular structure should provide a flexible and secure home that helps save the British taxpayer more than £1.8bn and allows the urgent repair works to proceed. It could be built in less than three years in shipyards across the UK and floated along the Thames to be secured and assembled on the river some 10m from the Palace of Westminster.

Once the refurbishment of the Palace is complete, the modular structure could be relocated and adapted to provide a permanent legacy, such as a Museum for Democracy or, alternatively, a new parliament for an emerging overseas democracy. 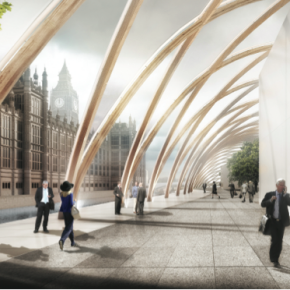 The Houses of Parliament offer an enduring symbol of stability and democracy, expressing the necessity for the continuity of Government in this historic location in Westminster – Ian Mulcahey, Gensler

Frequently asked questions
• How will it be constructed and what will it be made of?

• How big will it be in terms of height and square footage? The final dimensions of the structure are flexible, but it is anticipated that it will be 250m in length and 42m in width.

• How much will the actual structure cost to produce? Initial estimates suggest £160m.

• What is the estimated cost of the project overall and does it sit within the recommendation made by The Joint Committee on the Palace of Westminster? The cost is estimated at £160m and would enable the full decant option to be pursued.

How will the temporary structure be transported from shipyards across the UK to London and then taken away again?

The structure will be transported in a series of modular sections from shipyards across the UK and floated along the Thames, to then be assembled and secured on the river, adjacent to Parliament. This will allow the structure to be safely transported and navigated through London’s bridge network.

• Is the view of Parliament from the River Thames protected and how will the proposed structure
impact it?

Throughout the restoration of Parliament it is anticipated that the building will be wrapped in scaffolding and hoarding. The new temporary structure will provide a symbolic representation of the continuity of Parliament and would be relocated after six years. The structure would add a new iconic landmark to London and would not impact the protected vista of the Palace of Westminster from the summit of Parliament Hill.

• How will you ensure that the proposed structure is safe and secure? Won’t the river be a security risk?

The structure will be built to all the latest UK maritime standards with additional measures to protect it from collision and intrusion. The river will act as a natural moat to maintain the security cordon around Parliament. Due to the nature of the design, entrance security will remain as it currently stands for the Palace, as the main thoroughfare will run through Westminster Hall, St Stephen’s Hall and Central Hall out onto the new structure.

• Will the structure impede the flow of the river or traffic along that stretch of waterway?
It is not anticipated that the proposed structure will provide any noticeable impediment to the river flow, and it is specifically located outside the existing centrally located navigation channels. The entire temporary Parliament sits within the security exclusion zone already established around the Palace. The opportunity also exists to allow construction traffic to utilise the river by pulling the structure away from the river towards the member’s terrace.