A former tram station in Bristol has become the first building in the UK to benefit from large scale R32 air conditioning, from Mitsubishi Electric.

The Art Deco building in Gloucester Road was originally a main station for electric trams – it is now occupied by one of the largest environmental business network in the UK – Future Economy Network.

Renamed the ‘Future Leap Hub’, the refurbished ground floor now brings together likeminded companies and acts as a showcase for sustainable businesses.

It offers a carbon neutral co-working space, meeting rooms and an event space for hire, in which weekly, sustainability themed events are hosted.

The F-Gas Regulations are affecting all air conditioning systems and the next step in the Phase Down of refrigerants with high global warming potential (GWP), which takes place in January.

The air conditioning industry has been transitioning to R32, which has a significantly lower GWP than previous R410A systems but this has not been possible for larger VRF (Variable Refrigerant Flow) systems until the launch of the City Multi R32 VRF at the end of last year.

Alan Bailey, Director of the Future Economy Group and Future Leap Ltd, commented: “We looked across the market at a whole host of technologies for our heating and cooling and when Mitsubishi Electric’s R32 system was recommended to us by Envira-Mech Services, we quickly realised it was absolutely the right product for us

Future Leap is carbon neutral in its operation and has incorporated lots of sustainable technologies and solutions, including a carpet made from disused ghost fishing nets that have been reclaimed from the bottom of the ocean and turned into carpeting.

Terry Macleod, MD of Envira-Mech Services Ltd, said: “When I first started talking to Alan about his requirements it was obvious that he wanted a system that would help promote energy efficiency and future-proof the building.

“We’re a Diamond Quality Partner with Mitsubishi Electric and when we heard about R32 VRF at their conference last year, we just knew it would be right for Future Leap.

“Alan was already aware of F-Gas and was open to anything, so the idea of highly efficient air conditioning that could simultaneously heat and cool and run off 100% renewable energy really appealed to him”

Envira-Mech Services is based in Clevedon, North Somerset and predominantly covers the south of England, whilst providing national coverage for specific clients.

Offering a full design and installation facility for customers, Terry and his team are able to provide a complete turnkey service.

For Future Leap, the team also installed Lossnay mechanical ventilation with heat recovery (MVHR). These deliver highly efficient ventilation to the building, as they can recover up to 80% of the energy from outgoing stale air to use on the incoming fresh air.

Envira-Mech Services had a very tight timescale on the project, as the complete refurbishment programme was only three months, so Terry and his team had just five weeks to complete the installation and commissioning.

Not only did they have to work around the other trades refurbishing the building at the same time, there was not a lot of room for the services, so they also had to ensure the highest quality of installation for all ducting and pipework, as these are all on display. 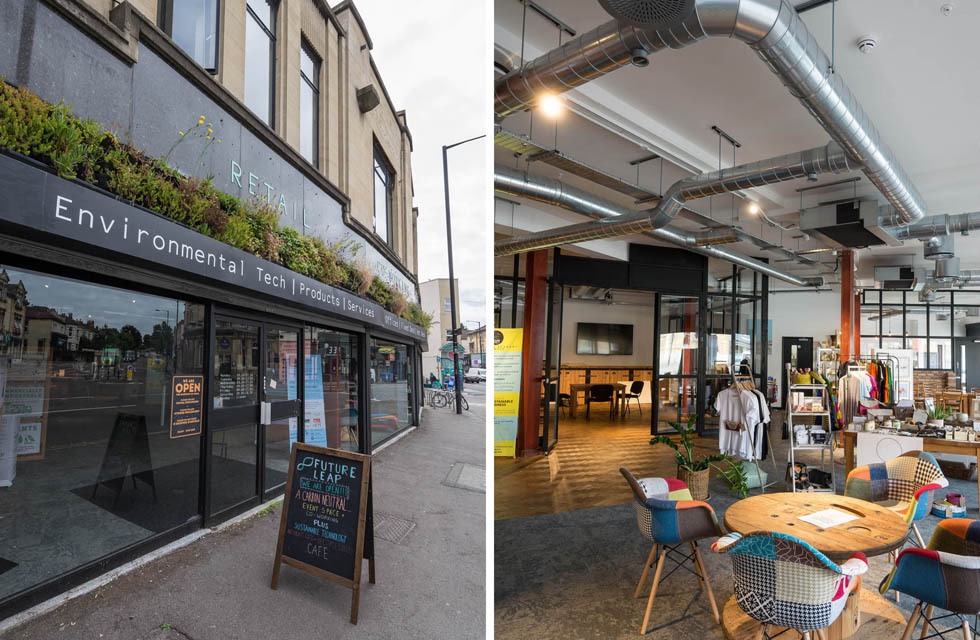 Alan Bailey added: “I have to say I can’t speak highly enough about Envira-Mech Services, they were really, really good on site.

“They were very conscious of the other trades who were working on site at the same time, and were very happy to fit in when the scheduling went a little bit out of sync.”

When Future Leap took over the building, it was a former Maplin electrical goods store, and Envira-Mech Services had to first of all strip out the existing air conditioning before they could install the R32 City Multi and the Lossnay MVHR.

Steve Reece, Branch Manager for Mitsubishi Electric’s Bristol office, commented: “Terry and his team are experts in air conditioning, ventilation and M&E services, so they were the ideal choice for Future Leap.

“With this being the first R32 VRF installation in the UK, we worked closely with them to ensure that Future Leap got a system which will deliver perfect, controllable comfort with energy efficiency at its heart.”

The three PURY YNW-A outdoor condensers are installed in a compound in the old Maplin storage yard and these serve 14 PEFY fan coil units throughout the ground floor.

Although R32 is mildly-flammable, and room sizes were considered during the design phase, the level of ventilation mean that leak detection wasn’t required.

The Future Leap Hub has been re-opened since July and now offers businesses in Bristol 70 socially distanced desks, as well as an ethical cafe and lifestyle shop.

With the installation of the latest R32 system, the Hub is also able to deliver future-proof heating and cooling, regardless of the weather.