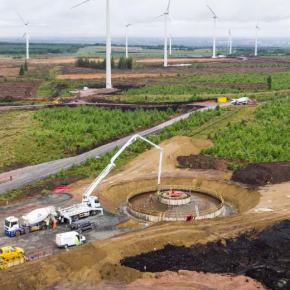 A swift windfarm solution by Aggregate

This would host 22 turbines, with a 52MW capacity, able to provide power to roughly 30,000 homes over the next quarter of a century.

The Aggregate team provided 480 cubic metres of ready-mixed concrete, used for each of 22 turbines bases.

However, prohibited direct access to the site, which added a further 10 miles to the journey from the supplying plant Duntilland, made the task at hand plenty tougher. 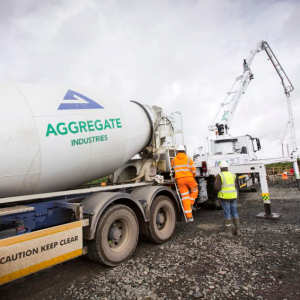 Despite this, the Aggregate Industries logistics team were able to overcome these road restrictions and deliver the projects needs.

The specification of concrete was also challenging, which required careful consideration and extensive trials by Aggregate’s Technical team to create a bespoke concrete mix.

A very tight programme led to a swift plan of action, which saw 12 truckmixers and two plants used to complete the turbine base pours in an allocated 12 hour window.

In total, over 10,500 cubic metres of concrete was used, in a project worth over £1million.

Jamie McMeekin, commercial director Scotland, said that despite the challenges faced, the contract was ‘a great success’.

“Together, the team was able to deliver the necessary roads, foundations for the turbines, substation and control building, allowing the contractors to finish the job ahead of schedule,” he commented.