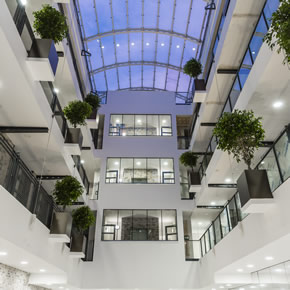 Earlier this year, Wrightstyle supplied its advanced glazing systems for installation in a luxury Camden-based apartment complex, which was featured in the latest series of The Apprentice.

Wrightstyle’s advanced glazing systems have been designed to provide acoustic and thermal performance, whilst protecting against fire. Residential specifications are becoming increasingly strict; the glazing systems offer a solution.

Avdon Bristol contracted Wrightstyle to supply internal screens and door systems for the Carlow House development. The former Edwardian warehouse has been transformed into a group of one and two bedroom apartments, designed by Galliard Homes

Wrightstyle delivered unlatched thermal and acoustic doors, in a total of 17 configurations, for installation throughout. Meanwhile, glass-to-glass jointed screens were fitted in the main lobby area, which sits beneath a four-storey atrium.

The impressive development was featured on The Apprentice; contestants were tasked with selling the new apartments. The building was officially opened by Lord Alan Sugar earlier this year.