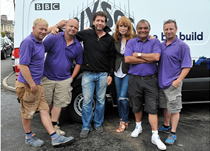 DIY SOSs latest Big Build project was completed for Jenny and Mark Corns, who thought they would never be able to have children.

After rounds of fertility treatment and the devastation of giving birth to stillborn twins, the couple welcomed their daughter, Abigail, three years ago.

Jenny fell pregnant again, and gave birth to identical twins at home in February 2013. The twins were very unwell; Katie was not breathing and Emilia was breech.

They were both diagnosed with respiratory illnesses, bowing legs and a form of dwarfism called Achondraplasia.

To help the young family, BBCs DIY SOS team added a two-storey extension on to their home in Loughborough. Local tradesmen assisted in building a downstairs bathroom, which was essential for the twins.

The new bathroom was fitted with Geberits AquaClean 800plus Care, a technologically advanced shower toilet.

The system combines the convenience of a warm water wash and a warm air-dryer, allowing its users to clean themselves effectively.

AquaClean 800plus Care will aid Jenny and Mark in washing Abigail and Emilia; it will also allow the twins to attend to their own hygiene as they grow into children and young adults.