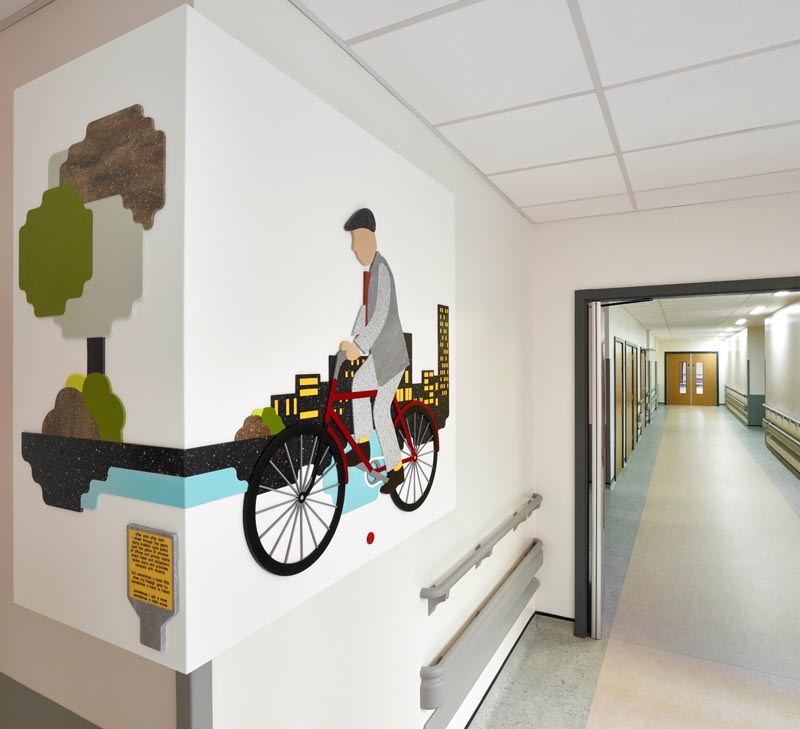 Comprising 160,000 square metres of space and over 1,300 beds, the new South Glasgow University Hospital and Royal Hospital for Sick Children is the largest capital healthcare project in the UK.

The £840 million development completes this year, replacing four of Glasgow’s older hospitals. To add the finishing touches, six art projects were commissioned to brighten up the new building.

In preparation for one of the projects, artist Rachel Mimiec held a number of workshops focusing on the idea of noteworthy journeys.

The workshops revealed that distinctive objects can play a key part in signposting memory, which fuelled the scheme to create a series of eye-catching images that would help people to visually navigate the hospital.

To make each landmark unique, each was designed to represent a member of staff’s story.

A small poem based on each story – written by poet Robin Wilson – has been incorporated within the detail of each landmark.

The material was selected for its versatility, as well as its reliability as a hygienic surface for use in healthcare environments.

With a colour palette providing more than 90 hues, DuPont Corian offers plenty of choice: for each landmark, a white background was chosen, with each design mounted in coloured material.

After the designs were created, Interior Surface Specialists utilised CNC technology to cut out the various pieces. Each panel was then composed with seamless bonding and thermoforming when necessary.

The pieces were hand-finished to add a unique touch.