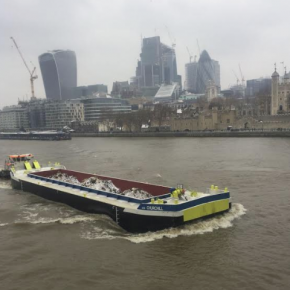 Aggregate Industries, in partnership with Bennett’s Barges, has welcomed the first of its new vessels, set to add huge tonnage to the River Thames.

This comes as part of the long-term Thames Tideway Tunnel project, primarily based at the Carnwath Road Riverside construction site.

Bennett’s Barges’ role on the 25km tunnel project is to eradicate the spoil produced by the tunnelling process. They are working for the BAM Nuttall, Morgan Sindall and Balfour Beatty joint venture, delivering the 7km west section of the tunnel.

Its commitment to the project has seen the Aggregate Industries and Bennett’s Barges joint venture procure eight specialist barges to carry the spoil along the river.

Bennett’s Barges will be employing and training up to 24 marine operatives, including a number of Skippers, to operate the fleet. The venture has also procured two new state-of-the-art tugs, with an innovative rising bridge, designed for this project and crewed by boat masters from Bennett’s Barges.

The first of the new 1,500 tonne capacity barges, Churchill, not long finished its voyage to London and was immediately put to work, followed shortly by the arrival of a new 1,000 tone capacity barge, Phoebe. All barges will be operational by next month.

With six more new barges set to be added to the fleet, the work is well underway to ensure an efficient removal of spoil at the required rate, safely, and environmentally friendly.