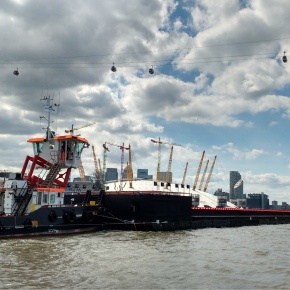 Aggregate Industries has secured the contract to move spoil away, by river, on the western section of the £4.2 billion Thames Tideway Tunnel project, through its Bennett’s Barges business.

Aggregate Industries is tackling sewage discharge into the River Thames with the Thames Tideway Tunnel, financed and delivered by Tideway, running from Acton in West London to Beckton in the east. The project has been divided up into three construction sections which are each managed by a different contracting consortium.

The west section is being managed and constructed by an equal three-way joint venture between BAM Nuttall, Morgan Sindall and Balfour Beatty.

Aggregate Industries will be removing, loading and transporting the 800,000 tonnes of spoil that the tunnelling process produces, to a suitable site in the East. This is crucial as the tunnel boring machines not being interrupted is vital to the success of the project.

Approximately 34,000 less vehicle movements will take place on the road network by moving the spoil to the deposition site on river barges.

An investment by the joint venture has been made in two state-of-the-art tugs, with an innovative rising bridge, designed specifically for the project. Ten specialist barges will be procured to carry the spoil along the river and Bennett’s Barges will be employing and training up to 24 Boatmen, including Skippers to operate the fleet.

Chris Livett, Managing Director at Bennett’s Barges explained that the company is delighted to have been appointed as primary marine specialist contractor on the western section of the project and will alleviate congestion on the roads and reduce impact on the environment.