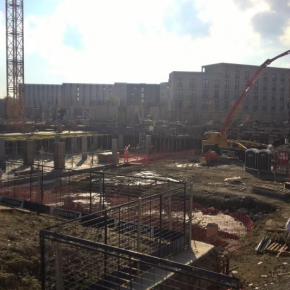 Aggregate Industries recently supplied 3,000m3 of its Watertight concrete mix to the North West Cambridge Development – the University of Cambridge’s ambitious £1bn scheme to create a new district of homes, shops, and schools on the city’s outlying farmland. 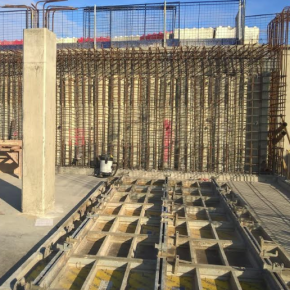 Approximately 91 residential homes were built as part of the first phase, The Eddington site, built on top of an underground car park. Aggregate Industries’ Watertight, specialised ready-mixed concretes, were chosen to protect the car parks’ structure from water ingress and potential damp.

Core to this was the 3,000m3 of custom blend Watertight, made using the Masterlife WP799 BASF’s, a high performance waterproofing system for wet cast concrete incorporating combined waterproofing and super plasticising components. In addition, the second tier of waterproofing utilised BASF’s ancillary products at the construction joints such as MasterSeal910, hydro-swelling water bars used to seal and leak-proof joints in concrete structures by swelling up to 200% on exposure to water.

Simon Wycherley at Aggregate Industries, said: “With a host of high performance concrete blends at our disposal, including BASF admixtures, we were able to create bespoke Watertight concrete solutions with superior water-resistant properties, enhanced toughnesss and excellent workability that will no doubt last for years to come.”