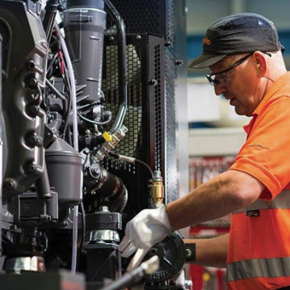 The Riverside Museum in Glasgow has unveiled a new display, sponsored by Aggreko, inspired by the achievements of one of Scotland’s most influential sons, inventor James Watt.

The display, titled Going Green – The Drive for Energy Efficiency, is sponsored by the Glasgow-based company, the global leader for mobile, modular power, heating, cooling and energy storage.

The exhibit focuses on Watt’s pioneering spirit, his legacy and his dedication to efficiency, aiming to connect today’s pressing need for renewable energy sources with Watt’s inventions, which saved large amounts of fossil fuels and improved the efficiency of existing technology such as the steam engine.

Over 250 years ago, Greenock-born Watt invented a device called a ‘separate condenser.’ After many years of experimentation, Watt succeeded in adapting existing technology to reduce the amount of coal needed to drive a steam engine.

This breakthrough not only improved energy efficiency but also helped shape our modern industrial world.

Meanwhile, in the present day, Aggreko continues to make investments into new technology and solutions for cutting emissions, making it a natural sponsor for this exhibition.

Recent projects include the Y.Cube battery storage system, which is built and assembled at Aggreko’s Dumbarton base.

The Y.Cube is a lithium-ion battery system, which combines storage with intelligent software to allow for fast response times and precise energy management.

It can be delivered and quickly deployed worldwide, giving users the flexibility required for the safe and stable use of green wind and solar power.

Now the wind farm is operational, Aggreko has installed two Y.Cube storage units, which can harness the power being generated by the turbines and either send it back to the grid, or store it for use when power generation is intermittent.

Robert Wells, MD of Aggreko Events Services, commented: “We are proud to be a part of this project at a time when reducing carbon emissions is a priority for all.

“We are always looking for ways to help our customers cut their carbon footprint, and we look to previous innovators such as James Watt for inspiration.”

Neil Johnson-Symington, Curator of Transport and Technology with Glasgow Museums, said: “The inventor James Watt was full of ambition from the beginning. A determined, gifted engineer who changed our world forever, he has been honoured across the globe.

“As this new display shows his legacy lives on. It is also a wonderful demonstration of our commitment to contemporary collecting.

“We are very grateful to Aggreko for their support in enabling us to realise this fantastic new display. Everyone agrees new ways of powering our nation are needed.

“It is our hope Going Green – The Drive for Energy Efficiency will challenge young minds to think like James Watt and go on and make a fundamental difference to the future of our planet.”

Find out more about Aggreko’s approach to sustainability here