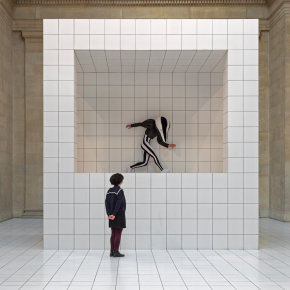 An Artistic Uncoupling of Tile at Tate Britain with Schluter

One British artist a year is invited to produce a new work for the signature space, which constitutes the heart of one of the UK’s most famous art galleries.

The installation involved tiling the length of the Duveen Galleries; contacted by curator Linsey Young, Schlüter donated its market-leading uncoupling membrane for use beneath the white tiles laid above the galleries’ terrazzo floor. 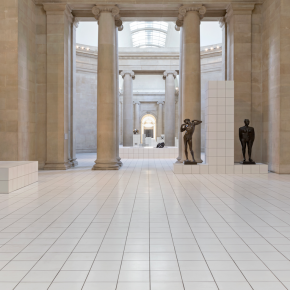 1,300 square metres of Schlüter®-DITRA 25 was installed and tiled in the lead up to the exhibition opening on 22 March.

Creating a striking contrast with Tate Britain’s neo-classical architecture, the commissioned work will remain in situ until 7 October, meaning a 6-month run which is expected to attract approximately 700,000 visitors.

One performer per day takes to the tiles from 10am-6pm, clad in their choice of one of seven costumes designed by Jonathan Anderson, Creative Director of luxury clothing and accessory brand, Loewe. 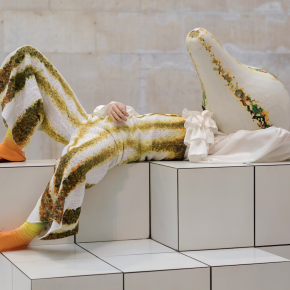 The project marks Schlüter-Systems’ second involvement with Tate Britain; with the first being back in 2011, where the company took part in the £45 million renovation of the Grade II listed Millbank building, led by architecture firm Caruso St John.

The renovation involved the creation of new education and events rooms, including the art gallery’s Djanogly café and opened in November 2013; this saw DITRA 25 used again, for uncoupling provision beneath agglomerate stone or unglazed porcelain floor tiles, dependent on the rooms and areas in question.

Cement-free tile backerboard, Schlüter®-KERDI-BOARD can be found supporting wall tiling in the WCs and kitchens.

Schlüter®-DILEX movement joints, in a range of variants, can be seen within the floors and walls of these areas, helping to maintain crack-free coverings.