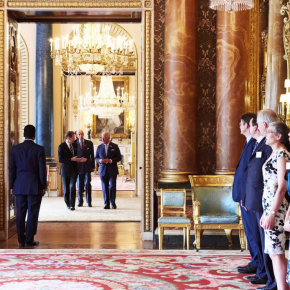 Ancon has been honoured at a Royal reception to celebrate its success in the 2018 Queen’s Awards for Enterprise; the third award of its kind the company has earned.

The champagne reception, held in the State Rooms of Buckingham Palace, was hosted by The Prince of Wales, on behalf of The Queen.

Other members of the Royal Family attended, including HRH The Duke of Kent, further illustrating the status of this prestigious industry award.

Ancon’s Export Manager, Hervé Poveda, and Operations Director, Peter McDermott, represented Ancon at the event, along with representatives of its business partner, MagmaTech, joint winners with Ancon of the 2018 award.

The two Ancon representatives, who share over 50 years’ service and have carried out vital strategic roles in the company, helping it achieve and maintain UK market leadership and significant international growth, were both immensely proud to be at the event.

Speaking after the reception, Hervé Poveda commented: “What a wonderful personal experience to meet the Royal family at Buckingham Palace and a great honour to be asked to represent Ancon at this event.

“A Queen’s Award not only recognises expertise in developing new products or achieving commercial success, but also excellence in every area of business. I am proud to be a part of an organisation that has proved itself, once again, to be among the best in the world.”

Peter McDermott added: “Winning one Queen’s Award is a great achievement, but winning three is a real measure of the depth of expertise, knowledge and dedication that exists within Ancon, at every level of the company.

“Today is a proud moment for every Ancon employee as well as our suppliers, customers and partners who have contributed to Ancon’s achievements throughout the world.”

Ancon’s latest Queen’s Award, for continuous excellence in innovation, comes as a result of expanding into advanced composites, with the successful introduction and on-going development of the ultra-low thermal conductivity Teplo range of basalt fibre wall ties, which improve the energy efficiency of masonry construction.

This success follows Queen’s Awards for International Trade in 2015, for three years of outstanding sales growth across new and existing export markets, and a Queen’s Award for Innovation in 2012, for the in-house development and commercialisation of a patented Lockable Dowel, a product that revolutionised the construction speed of post-tensioned concrete buildings.

The 2018 Award will be officially presented to Ancon later this year when the Lord Lieutenant of South Yorkshire, HM The Queen’s local representative, visits the company’s recently-extended production facility in Sheffield.

The lowdown on the Newton Specification Partnership

Newton Waterproofing Systems are pleased to announce the Newton Specification Partnership (NSP), which was formed this year as a result of Newton’s desire to improve the process of designing and specifying waterproofing systems.