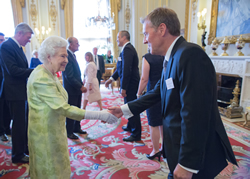 Ancon recognised by the Queen at Royal Reception

The reception was hosted by the Queen and the Duke of Edinburgh on Tuesday 14th July 2015.

Other members of the Royal Family in attendance included the Duke of York, Princess Eugenie of York and the Princess Royal.

The Queen receiving Ancon Managing Director, Stuart Maxwell, at a Royal Reception for winners of the Queen’s Award for Enterprise 2015

Ancon’s Managing Director, Stuart Maxwell, and its Marketing Manager, Annabelle Wilson, were joined by representatives from other award-winning companies for the reception held in the state rooms of Buckingham Palace.

Ancon’s success at the 2015 Awards comes in recognition of its International Trade, acknowledging the company’s achievements in growing sales across new and existing export markets.

The company was previously successful in 2012, having been honoured with a Queen’s Award in Innovation for the development and commercialisation of a unique Lockable Dowel, a system used heavily in post-tensioned concrete construction.

It was a great personal honour to be welcomed by The Queen, and to be introduced to so many members of the Royal Family, Stuart Maxwell commented, following the reception.

The Queen’s Award Reception is a unique event, and one that most in the business community will never have the opportunity to attend. For Ancon to attend a second Reception in just three years is a huge achievement for everyone at the company.

The 2015 Award will be officially presented to Ancon by the Lord Lieutenant of Clwyd, at a special ceremony at Ancon’s manufacturing facilities later this year.