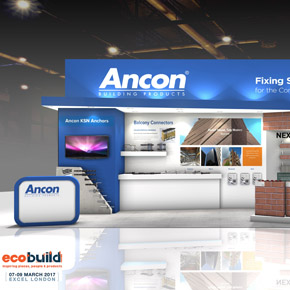 The much anticipated Ecobuild 2017 is set to keep innovation at the top of its agenda as it debuts a series of high integrity structural fixings from Ancon.

Ancon will also be debuting its expanded range of structural thermal breaks for balcony locations to accommodate even higher loads at Ecobuild 2017.

Suitable for large cantilever balconies and situations where column layout or rebar congestion limits the number of connectors that can be installed, Ancon balcony connectors have been developed to minimise heat loss whilst maintaining structural integrity.

The balcony connectors are available to suit concrete-to-concrete, steel-to-concrete and steel-to-steel applications.

All solutions can also now be specified in stainless steel which is three times more thermally efficient than galvanised/carbon steel.

The CARES-approved KSN Anchor system will also be on display for visitors. The system allows engineers to design slab-to-wall connections in reinforced concrete frames without the restrictions on bar length and bar diameter of traditional re-bend continuity systems.

The system works by casting internally threaded anchors into a concrete wall which accept Bartec parallel thread reinforcing bars during construction of the adjoining slab.

For visitors designing PassivHaus and Zero Carbon projects, a new product innovation from the award-winning Teplo range of basalt fibre wall ties will be unveiled at the show.

Samples of Ancon’s low thermal conductivity ties will be displayed including the new Teplo-BF, a new build cavity wall tie with a thermal conductivity of just 0.7W/mK that has exceptional mortar grabbing capability, suitable for use with lime and other slow-drying mortars.