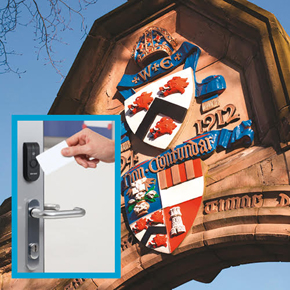 ASSA ABLOY’s Aperio wireless access control devices have been specified as a modern security solution for the Hillhead Student Village at Aberdeen University.

Aperio devices have been developed with the capability to secure, monitor and record activity using a single system, instantly integrating with third-party access control systems.

The access management devices were installed as part of a £10m refurbishment programme which included plans to upgrade the university’s security whilst reducing running costs and emissions.

Students and staff were equipped with MIFARE RFID smartcards to gain entrance to apartments and plant rooms, eliminating the need for traditional keys.

As Aperio cylinders and locks are battery-powered and wireless, they provide a cost-effective security solution which is also energy efficient.

Unlike standard wired access control locks which need an always-on mains connection, Aperio locks only “wake up” when presented with a credential. As a result, they consume much less energy.

The system also offers a modern solution to the common student problem of lost room keys. Unlike with mechanical keys, security managers can block and reissue lost smartcards instantly using the system software.