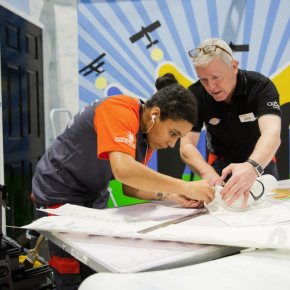 Apprentice Decorator of the Year: Crown celebrates the big 40

The Apprentice Decorator of the Year competition, sponsored by Crown Paints, is back and bigger than ever, with the nation’s best budding painters and decorators from colleges nationwide taking part.

This is a landmark year for Crown Paints, as the company has now been supporting the contest for 40 years.

The company has a full calendar of activity planned to mark the milestone, from special training days at Crown HQ, to exclusive offers and deals via its network of 150 Crown Decorating Centres.

Apprentices will soon be taking part in one of 11 regional heats of the competition, which is organised by Worldskills and the Construction Industry Training Board (CITB) and sponsored by Crown Paints, together with other industry leaders, such as British Gypsum.

Despite its long history, the main element of the Apprentice Decorator of the Year competition has remained the same: testing apprentices on their decorating technique, accuracy and attention to detail.

The designs are carefully created to test multiple skills and have changed over the years to mirror the fashions of the time or key events, such as last year’s design. inspired by the 100 year anniversary of the end of the First World War.

The 11 regional heats began at Belfast Metropolitan College on 22 March and will come to a close at South Devon College, on 13 June 2019.

The final will be held during this year’s WorldSkills UK LIVE, at Birmingham’s NEC, from 21 – 23 November 2019. It is the largest multi-trade competition in the UK for construction trainees and apprentices and covers a range of skills and sectors from bricklaying and cabinet making to plastering and stonemasonry.

Commenting on the launch of this year’s competition, Ben Deer, assistant judge and former Crown Paints Apprentice Decorator of the Year winner, said: “I’m looking forward to meeting the next crop of talented apprentice decorators over the course of the competition, and I’m excited to see what Crown has up its sleeve for the 40 year anniversary of its sponsorship.

“The Apprentice Decorator of the Year competition has a rich history of unearthing very skilled painters and decorators; for example, last year’s winner has already been offered a full-time job with City Building Glasgow as a result of winning the award.

“Taking part teaches you a lot about attention to detail, as well as working tidily and to a deadline – all vital skills for building a successful career in the future.”