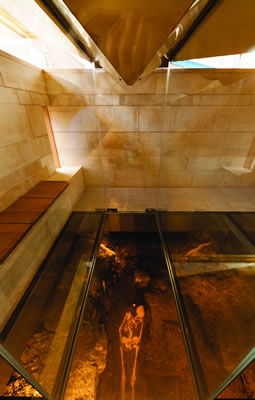 In late 2012, an excavation undertaken by the University of Leicesters Department of Archaeology led to the extraordinary discovery of King Richard IIIs remains in a Leicester city car park  unlocking a part of history that had remained lost for centuries.

Maber was commissioned by Leicester City Council to design the Richard III Visitor Centre, which was to be located on the site of the grave and within the adjacent former Alderman Newton Grammar School. The design of the new building elements and alterations to the existing building fabric needed to complement a fascinating exhibition, designed by Studio MB, which leads the visitor through the life of Richard III to the present day discovery. The new centre draws influence from the historic remains of the Greyfriars church, which stood on the site at the time of King Richards life and death and contributes to the interpretation of this special place.

Limestone, timber and stone was sourced from local sites

The new buildings have been carefully designed to protect existing archaeological features and, where practical, better reveal these heritage assets. The design of the centre also takes into account the importance and sensitivity of the final resting place of a former King of England. Paul East, director at Maber, explained that knowing the history of the site was key in designing the building architecturally, he said: We carried out a sort of historical dot-to-dot to encapsulate what was already on the site. We had to build over the grave of a former King of England, which is obviously a very unique project  and one that needed to be expertly handled.

Weve got some really nice subtle references to the medieval site where the centre stands incorporated into the design of the centre. For example, the courtyard is in Herricks garden and some of the exhibition spaces form what was the choir of the Greyfriars abbey.

Keeping things local was central to the project, for example, the limestone that is used throughout the visitor centre was sourced from a nearby Lincolnshire quarry, located less than 25 miles away from the site. Other materials were also sourced locally including the stone flooring from Derbyshire and the exposed timber which comes from a local English Green Oak. This adopted doctrine meant that the architects were able to further replicate how the Greyfriar church would have been built originally  with local materials the only option available for tradesman at the time.

The whole centre had to work from a visitor perspective, this included extensive alterations to the circulation routes, including introducing a new staircase and lift into an historically sensitive building. There were also an incredible amount of services that had to be introduced including a full air conditioned system, connection to the district heating mains and extensive AV, lighting and sound systems to help bring the exhibition content alive.

The exhibition has been divided into three sections: Dynasty  which explores King Richard IIIs rise to power, Death  the explanation of the Kings death in battle and Discovery, which unearths the story of the research behind the discovery of the monarch. The rear hall of the school building has been converted into a café area at ground level with direct access to the private courtyard and amenity area and the upper floor a flexible function room space, which will be available for educational activities and out-of-hours operations such as conferences or wedding hire, providing an important source of revenue for the centre.

The original school building has also been upgraded to achieve a better thermal performance ensuring its longevity for years to come. This has been achieved through creating a structurally stable and watertight envelope and introducing a better thermal fabric where possible. However, some of the original elements such as an unsafe orial bay window needed to be replaced. To achieve this, the original window was replaced with a new frameless glass version. The new version of the orial window now acts as an important orientation device; providing a clear view of other activities happening throughout the centre and offering visitors a place where they can see how Medieval Leicester has developed to its present day.

King Richards remains were found under a Leicester car park

An ashlar limestone wall was designed as a defining feature of the visitor centres design; the architect carefully designed the new ashlar limestone wall to reach forward and draw people in to the main entrance from St Martins and Leicester Cathedral opposite.  The wall then connects the reception area to the new linking galleries and eventually forms an enclosure to the rear landscaped courtyard space and a separating device between the centre and the grave enclosure.

Although the exhibition was important to tell the story of King Richard III, for Maber the enclosure over the former grave was the most important aspect. Working with what was effectively just a hole in the ground, they wanted to create a contemplative, simple environment for the end of the visitor experience. They took reference from a tomb lid being lifted to partially reveal the insides. Therefore, the roof needed to float above the main building enclosure, which was easy to draw as a concept but proved to be a challenging building puzzle. Working with Elliott Wood Structural Engineers and IPIG glazing specialists, the whole roof was designed to be built first on temporary supports then lowered down onto three sides of structural glazed panels to take all of the load. The result is an elegant roof structure that is clear of columns to bring light into the grave enclosure space.

The building is fully air conditioned

The brass roof of the enclosure continues internally to form an inverted pyramidal ceiling, with its lowest point centred over the excavated grave, thereby drawing the visitors gaze to the main focal point of the whole centre. The low ceiling around the grave is intended to encourage visitors to bow their heads. A glazed enclosure sets out the footprint of the grave and stops visitors from walking over it. A glazed floor also reveals the original trench that was dug at the beginning of the works by the University of Leicester and displays a section of the actual choir floor of the Greyfrairs Church.

Other subtle references include timber benching to reflect the misericords of the choir stalls where the monks would have sat as well as a corner window centred on an original cloister route  now giving a view into the car park outside thereby reinforcing the newly adopted tagline The King in the Car Park.

The sensitivity of the restoration undertaken by Maber has been widely praised by the people of Leicester. Mayor, Sir Peter Soulsby said that:  Maber has been very sensitive to the historical needs of the building yet at the same time has ensured we have a modern visitor centre which is fit for purpose and provides a world-class visitor experience. Since its opening on 26 July, it has already attracted more than 10,000 visitors and is well on its way to meet its targets for inward tourist investment for the City of Leicester.