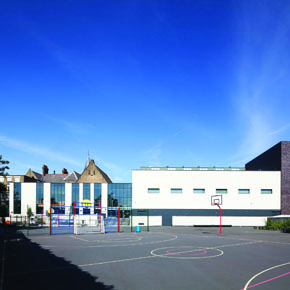 Architectural study: All in all it’s just another brick in the wall

Metric bricks have been used to create a contemporary façade on the Grade II-listed extension to the Raines Foundation Upper School in London’s Bethnal Green. ABC+D finds out more… 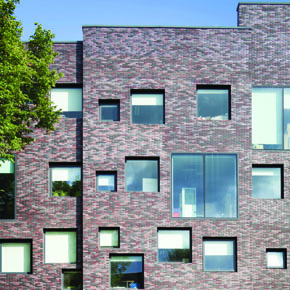 Astudio Architects has blended new with old on an extension to a Victorian-era London school, using metric bricks to create a bold, modern façade. The four-storey extension provides a contemporary counterpoint to the existing Grade II-listed building at Raines Foundation Upper School in the Bethnal Green Conservation Area.

The two buildings are joined by a three-storey glazed atrium and the expanded school can now accommodate 750 pupils. The Hagemeister Baltimore bricks specified by Astudio have a mixed palette of warm dark reds, anthracite blues and coral pinks, and their smooth finish takes on a silky sheen when the sunshine hits the west-facing façade. The bricks juxtapose with the sandy yellows and rustic reds of the London stock bricks in the adjoining school building and surrounding terraced housing.

“Our concept was contemporary architecture which would sit well in the context of the tree-lined street and conservation area,” said Sean Weston, Astudio project director. Planning authority, Tower Hamlets Council, did not require a brick façade for the new school extension but Astudio chose brick after briefly considering stone. “The local heritage officer wanted a contemporary look with a high quality finish – which is why we chose the Hagemeister brick,” said Weston.

Astudio looked at over 30 different types of brick before selecting the Baltimore, which measures 240 x 115 x 52mm. It covers some 2,400m2 of the new building’s façade. “We studied the other bricks used in the conservation area and thought that the Baltimore, which has several different colour shades in the range, would complement and contrast with the other buildings on the street,” Weston explained. “We made a conscious decision to use a metric size brick which adds further variety to the conservation area. Also, the bricks have a sheen and, because of the westward orientation of the main facade, they glisten when the afternoon sunlight shines through the trees.” 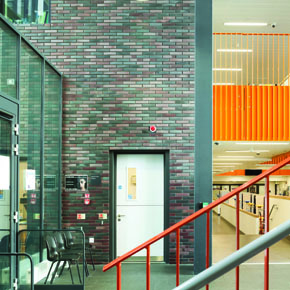 The brick façade of the new building is in proportion to the Victorian school, though some elements are higher. “This creates a dialogue between old and new,” commented Weston. “The terracing on Approach Road also undulates slightly and we wanted to create a terrace vernacular in the new extension to break up the mass of the school.”

The fenestration design on the western façade appears to be random, but is part of the overall design concept. It reflects the requirements of the internal teaching functions but was also designed to give pupils the sense that they were sat in the canopies of the tree, and provide shade,” said Weston. “The pattern also matches the random layout of the windows in the Victorian building.”

Inside the triple-height glass atrium, the brick walls of both old and new school buildings have been left exposed. “The gable wall of the existing Victorian building has been refurbished and this juxtaposes with the bricks on the opposite side of the atrium,” explains Weston. The back of the building is mostly a white rendered façade, though the bricks have been used as details in the landscaping, the retaining “The Victorians spent a lot of money on the front of buildings and less on the back and we followed the same principle – which is why the bricks are mostly on the front façade,” explained Weston.

The Raine’s Foundation extension has been shortlisted at the London Planning Awards for Best Built Project – Community Scale Scheme, and was longlisted for the WAN Education Award. It achieved an environmental rating of BREEAM Excellent and has been enthusiastically received by Benedict Wallbank, chair of governors at Raines Foundation, who said: “The wow spaces ­– and they do elicit wows – of the atrium and entrance are fantastic, but it is the subtle, modern contextualisation of the external façade where you have particularly excelled.”