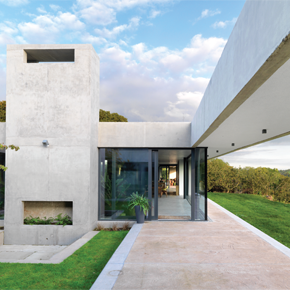 Architectural study: outhouse provides a place to live and work

Outhouse is a purpose-designed, highly sustainable, site specific home for two artists, constructed as a replacement dwelling in a remote location within the Forest of Dean. ABC+D finds out more…

The four-acre site lies in a sensitive rural location on a south facing, gently sloping wooded hillside. From within the site, there are panoramic views looking towards the Wye Valley Area of Outstanding Natural Beauty.

Offa’s Dyke boarders the west of the site, accordingly, by virtue of its location, the existing house and out buildings were visible from significant distances. 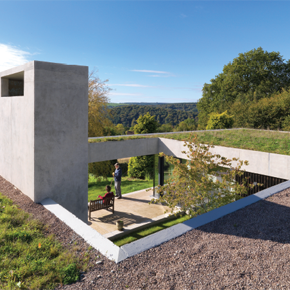 Commissioned in 2010, the clients sought an environmentally responsible, lifetime and inspiring home that would provide a series of interlinking, unique yet adaptable spaces for different times of the day, large enough to spend days at a time as a live-work dwelling.

The brief included their passion for the landscape and environment along with their requirement for two artist’s studios and a gallery-like space to display their art collection and lifetime’s worth of special belongings.

The building was to be contemporary and to respond sensitively and yet positively to the site, creating a timeless architectural solution which will contribute both to the immediate locality and to the wider rural area in general.

From the outset, the surrounding natural environment provided the primary source of inspiration for the proposals. The form of the building is derived from the landscape (the slope, trees, levels and the views) and from the site history.

The single-storey, low lying replacement dwelling is embedded into the site, cut into the slope of the hillside and buried to create an earth shelter which is integrated into the landscape.

The layout, organised around a series of external courtyards which trace the footprints of the three buildings formerly on the site, have been conserved and converted in the new dwelling from inside to outside spaces – hence its initial working title of Inside Outside House.

Each courtyard provides a welcome, sheltered space and, thanks to a series of rooflights, allows light and air to penetrate deep into the floor plan. A gallery runs from east to west dividing the living spaces from the work, allowing a degree of separation and privacy to the north-lit buried artists’ studios.

The encompassing roof is created by continuing the existing upper field along and over the building. This provides a highly insulated, intensive green roof as well as linking and binding the spaces together.

The footprints of the existing buildings, cut out and now open to the elements, form the beautiful external courtyards, within the interior space. The inside is now outside, the outside is now inside.

The building is a sensitive albeit pure architectural form, barely visible between the hedgerows that line the entrance track and entice you toward the building; as you get closer a covered entrance forecourt merges with the gallery which leads you into the south-facing central living space, from where you can appreciate the ever changing views.

Moving through this partially buried building you are greeted by courtyards that open themselves up to you allowing glimpses through and beyond, culminating in an intimate garden.

The low-lying dwelling is hidden from view from the north, concealed within the existing site plateau and topography. While the footprint of the dwelling is significantly increased, its visual impact is considerably reduced. The buried retaining walls are exposed cast insitu concrete with a high percentage of GGBS.

From the bespoke low-height worktops and cast-in concrete recess for hanging pictures, to the series of spaces for art making and sculpture, the details and language of the house provide a bold, yet subtle canvas backdrop.

This is a home designed to enrich the lives of its users, to settle and mature within its surrounding landscape and to suggest a new approach to sustainable, site specific, passive design in housing.

Completed in 2015, the dwelling was constructed by Forest Eco Systems under a Design & Build Contract. The dwelling has an EPC of 96/100 and includes sustainable technologies such as whole house ventilation with ground source heat pump, solar thermal and photovoltaic panels. 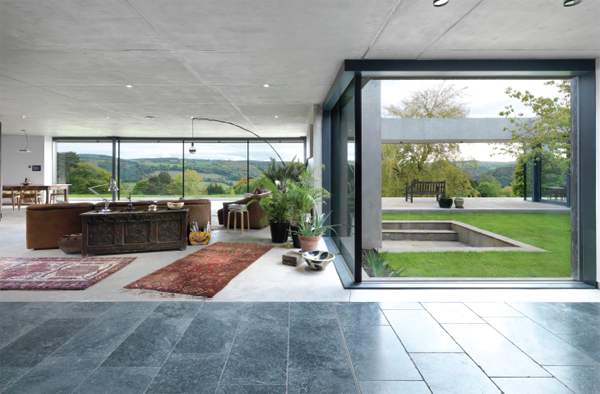 The house, which benefits from elements with U-values of 0.09/m2K, recorded an airtightness of 0.49 [email protected], well below the threshold for Passivhaus standards.

Described in the Architects Journal as “one of the most outstanding new houses in Britain in a decade”Outhouse has received recognition from the public, architectural press and the RIBA including, most significantly, being included on the shortlist for the Stirling Prize 2016.

“The simplicity of the house, which was undoubtedly hardwon, is founded on rigour and restraint. This is a house with a field on top – not an architectural green roof but a proper field, punctured with light wells that creatures are having to learn to avoid.

It is a concrete house where the concrete feels warm and luxurious and a considered and crafted palette of surfaces form a backdrop for the artist-owners’ own refined art and furniture. The design eloquently and effortlessly tackles many familiar issues – the blurred relationship between interior and exterior space, the penetration of light into a deep single aspect plan and the control of sustainability without flaunting it.

The key architectural device is a rigorous plan of organisation separating studio and working spaces on the uphill side and glass fronted living spaces on the downhill side to take advantage of spectacular views. The building’s backbone is a linear circulation space driven through the plan perpendicular to the site slope, with the front door at one end and Wales at the other.

The entrance is a modernist set-piece with a covered approach flanked by a black pigmented concrete pavilion and a simple, solid open stair running through a rectangular puncture in the roof plane. Channelled views through the glass door reveal the spine, wich, active as a gallery space, opens to and is illuminated by the living space on the downslope side. Fleeting glimpses of the retired owners’ traversing the house on micro-scooters confirmed the very definite feeling that we wanted to enter. To misquote Renee Zellweger in Jerry Maguire: ‘they had us at ‘Hello’’, – Keith Brownlie.