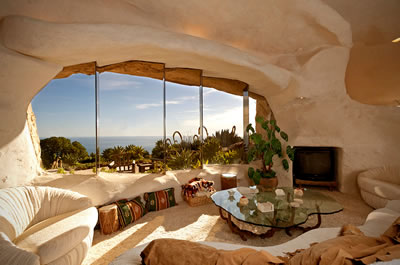 Architecture’s weirdest and wackiest buildings around the world

Buildingtalk has come across some unique architectural designs over the past few weeks – the latest being a new footbridge in London that opens up like a 70 foot fan, a house that is literally hanging from the side of a rocky cliff , as well as JK Rowlings plans to build Hagrids Hut in the grounds of her Scottish estate.

But what would your ideal house look like if you were given complete control over its design and location? We take a look at ten of the weirdest and wackiest properties from across the world and invite you to vote for your favourite.

The late Dick Clarks Flintstone House in Malibu was put on sale this year for just under $3 million. Designed around the well know home in the famous cartoon The Flintstones, the property spans 2,500 square feet and includes one bedroom, two bathrooms and impressive views over the Pacific Ocean, San Fernando Valley and Boney Mountains.

With aquatic features that make a resident feel like they are living under the sea, this giant Seashell House in Mexico City features a giant wall of colourful mosaics and spiral staircases. Designers, Arquitectura Organica, said that the aim of the project was to make inhabitants feel like they were living inside a snail.

If you have a fear of flying you may want to steer clear of the Boeing 727 Hotel Suite in the Costa Rican rainforest. Constructed on a purpose built ledge using a jet destined for landfill, the andpound;300 a night hotel suite offers guests the chance of playing captain for the night on the two bedrooms, two bathrooms converted aeroplane.

Despite architect James H. Johnson designing the property around the stems of Queen Annes lace, the five pod home was nicknamed the Mushroom House by critics and was referred to as being a desirable place for The Smurfs to reside in. Situated on a hill, each pod rests on a concrete and steel stem and weighs 80 tonnes.

A bioclimatic solar house situated in the Alsacian countryside in Eastern France, this energy efficient property has been designed as a three dimensional sundial. Designed by Eric Wasser, the home is set on a fixed angle in order to monitor the movements of the sun and provide shade during hot weather, whilst keeping the living space warm during cold temperatures by allowing natural heat to enter through the large windows.

An ideal abode for the likes of Elgar or Paul McCartney, the Piano House in Anhui, China, incorporates a grand piano and violin which homes escalators and a main staircase into the rest of this stunning building. Designed by Heifer University of Technology, this unique building acts as a performance and practice centre for music students at a local college.

The basket office building was built to resemble Lonabergers favourite product and cost $30 million to construct in Newark, Ohio. The seven storey building is 160 times bigger than the size of a normal basket and weighs approximately 150 tonnes. Though the design is not appealing to everybody, Lonaberger certainly does what it says on the tin.

Constructed by architect Piet Blom in the 1970s after town planners wanted to solve the problem of building houses on top of a pedestrian bridge, the Cubic Houses are balanced on a hexagonal pole and are made up of concrete floors, pillars and wooden framing. Situated in Rotterdam in The Netherlands, the cubes have been transformed into a hostel for visitors to the area.

Source: All that Is Interesting.com

If youve ever wondered what houses on Mars might look like under human colonisation, look no further than the Spaceship House on Signal Mountain in Tennessee. Featuring recycled rubber tire flooring and car pan handrails, this UFO shaped property gives homeowners the feeling that they are stepping out onto another planet each morning as they leave for work.

Pierre Cardins Bubble House just outside of Cannes gives the impression that residents are living inside the tentacles of an octopus. Incorporating 28 round rooms in the shape of soap bubbles, an amphitheatre, reception room, panoramic lounge and 10 suites, the Bubble House is a playground for the rich and famous with its picturesque views over the Mediterranean Sea.