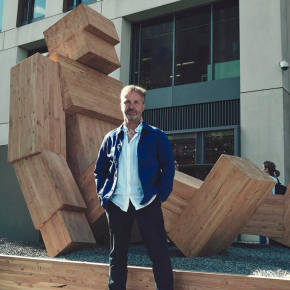 Armourcoat pleased to sponsor powerful ‘Talk To Me’ project

Armourcoat was recently pleased to sponsor the ‘Talk To Me’ project, which saw British designer, Steuart Padwick create a powerful and engaging two-piece interactive installation.

The installation is situated along King’s Boulevard in King’s Cross and comes as part of this year’s designjunction.

These large-scale works, standing over 5 metres high, were in support of the mental health anti-stigma campaign, Time to Change.

Light and sound elements incorporated into the installation by international consultants Hoare Lea, created a default breathing sound coming from each figure.

When someone approached one of the pieces from the front, they triggered a proximity sensor and the figure’s ‘burden’ cracked and emitted a glow of light. This cracked structure graphically lessened the weight and the piece spoke positive, uplifting words specially written by a diverse cross section of people including notable poets and writers.

Through ‘Talk To Me’, Padwick hopes to illustrate the importance of reaching out a hand to someone who is bearing the weight of an issue – through communication these burdens can be lessened.

You can view the short ‘Talk To Me’ film, directed by Dan Henshaw, a Citizen Films production, below:

Talk To Me – London from Steuart Padwick on Vimeo.