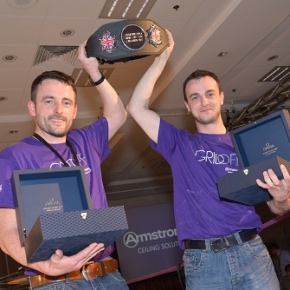 It was gloves off when 16 members of Armstrong Ceiling Solutions’ national network of Omega contractors were treated to a sneak preview of a new product.

Teams of two from each contractor went head to head with another pair of fitters in a Grid-Off competition to install the soon-to-be-launched TLS grid and Ultima+ board tile system in a 7.2m2 rig erected in a “boxing ring” at the NEC.

Organiser Isabel Blanco, Armstrong’s marketing and sales coordinator for the UK, Ireland and Southern Africa, said: “We were inundated with interest for this competition and that was reflected in how seriously our Omega members took the event on the day, not just in terms of finishing the installation quickly but finishing it well.”

The eight rounds, to commentary by boxing pundit Steve Bunce, saw the two fastest times through to a grand final during which Coyle Suspended Ceilings, all the way from Northern Ireland, emerged the winners and New Forest Ceilings runners-up.

The audience was also treated to a pair of “Armstrong Amateurs” taking on the challenge, with technical sales manager John Spicer and Ian Young, who runs Armstrong’s installation school in Gateshead, installing their ceiling, with a little help, in 08:00:71.

And what about the new TLS grid system? After their first round, the first time they had used the new TLS grid, Kevin Coyle and Tom Goodfellow said it was “First class. Very good, very easy to use. Clicks in nice and easy. At least 10% quicker.”

“We thought it was good. It went up very quickly and came down very quickly which is usually the problem [coming down]. It felt quite sturdy,” they said.

Reflecting on Coyle’s crowning as 2017 Grid-Off champions, Kevin Coyle said: “We were delighted to get the opportunity to compete and had been looking forward to the trip. The quality of the competition on the day was high amongst a field of skilled workmen from across the UK. We are delighted with the win, especially as we were the only Irish team to compete.  Our company is fortunate to have long-serving team members who work well together and I believe this helped Thomas and I to secure the win.  We hope to get the opportunity to defend the title next year!  Many thanks to the professional team at Armstrong for organising the event.”