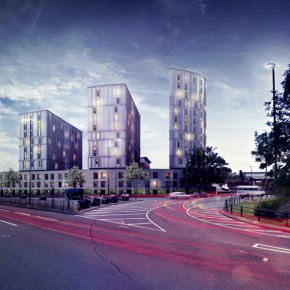 Aspex has sealed a contract to supply a bespoke range of doorsets to the 900 bed Paradise Street student accommodation scheme in Coventry.

Amongst the UK’s leaders in architectural ironmongery and doorsets, Aspex has worked alongside FBM Architects to create a custom-built version of its Novista Riser Steel Doorsets.

The system features a bottom and over panel to create a full height door, with a slim flush frame allowing more space for the M&E equipment for the project.

Over 700 Novista Riser Doorsets are being supplied and a project specific fire test was carried out at BM Trada; this included a 50mm high Nullifire Batt board above the overpanel for the M&E services to pass through.

Aspex is also supplying the internal timber doorsets and the access control system, which includes an electronic lock on all of the bedrooms, allowing students to access the building and their rooms with a card or their smartphone for enhanced safety.

Ashley Burberry, MD at Aspex, commented: “The student accommodation sector has been hugely successful for us. We’re delighted to have the opportunity to create a bespoke version of our doorsets which emphasises the versatility of our Novista Riser system. The access control system ensures students remain safe, allowing us to take safety to new heights.”

David Taylor, Senior Architect at FBM Architects, adds: “For this particular project, we required a frameless doorset that we could paint on site to match the walls. The Novista system met our requirements and we are really pleased with how the doors look and blend into the surroundings.”