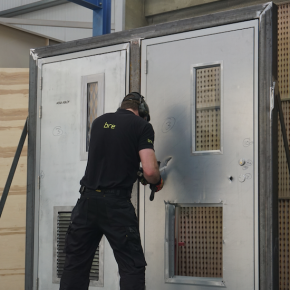 Visitors to IFSEC 2018 will get to see doorsets from ASSA ABLOY Security Doors rigorously tested in the BRE’s dedicated Attack Zone.

Hosted by expert technicians from the Loss Prevention Certification Board (LPCB), the BRE’s Attack Zone will show the difference between certified and non-approved products, and how quickly uncertified products can be compromised.

The brand’s steel and timber doorsets, which meet security rating SR3 of the LPS 1175 standard, will be tested using many methods of attack. As the most widely recognised commercial security door standard, and the one most commonly specified by British architects, LPS 1175 SR3 proves a door can deliver sufficient protection against a determined attack. 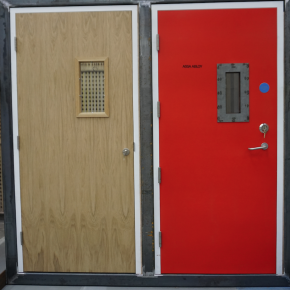 The live demonstrations come after a successful testing day with the BRE earlier in the year at ASSA ABLOY Security Doors’ factory in Lisburn, Northern Ireland.

This day consisted of an explanation of the LPS 1175 test standard, a factory tour and a practical demonstration of the doorsets’ resistance to attack; it showcased how quickly uncertified doors can fail and how robust those that meet LPS 1175 can be.

Richard Flint, Technical and Business Development Manager at BRE, said: “Following its official launch last year, our Attack Zone is returning in 2018 to highlight the difference between products that meet LPS 1175 and those that do not.

“By demonstrating the thorough testing that security doors have to undergo to meet the LPCB’s standards, visitors to stand H140 can be assured that the solutions from ASSA ABLOY Security Doors can meet their security needs.

“The event provides a fantastic opportunity for visitors to see the capabilities of the doorsets in action, and also ask any further questions to the ASSA ABLOY Security Doors team.”

Kevin Campbell, Sales Director at ASSA ABLOY Security Doors, said the Lisburn demonstration left the company looking forward to showcasing the capabilities of the LPS 1175 approved doorsets to a bigger audience at IFSEC 2018.

“While one doorset may look very similar to another, their resistance to attack may differ quite drastically. Providing assured safety, security and peace of mind, we look forward to testing our secure steel and timber doorsets at IFSEC 2018, Europe’s largest security exhibition,” he added.