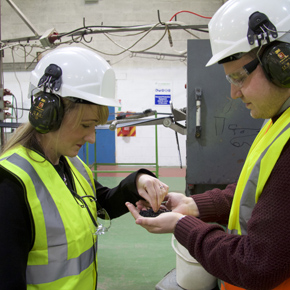 During the hour long visit, the Salford and Eccles MP was shown how Axpoly recycled polymers – derived from automotive (vehicle shredder residue) and electrical end of life feedstocks – are extracted and processed for re-use in products such as drainage, ventilation and vehicle components. 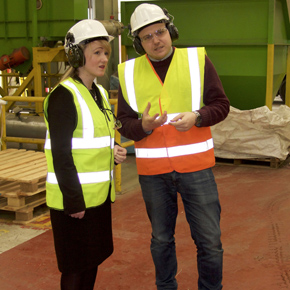 The Salford advanced processing plant was opened in 2006 and upgrades plastic extracted from end-of life vehicles at Axion’s nearby Trafford Park facility.

The sites employ over 40 people and have undergone substantial investment in recent years, including new plant and laboratory facilities that are driving growth and expanding the firm’s technical capability in supplying tailored polymers to suit specific end-user requirements.

Rebecca commented on her visit: “I never realised now much skill and technology was involved in tackling such a difficult waste stream. In recovering these valuable resources, Axion’s growing business contributes environmental, economic and employment benefits. That’s great news all round!”

Axion’s growth is being driven by high amounts of feedstock due to increased levels of vehicle recycling coupled with rising demand from customers to meet corporate sustainability goals.

Commercial Operations Manager Steve Bell commented: “Rebecca was impressed with our success in overcoming specific challenges to recycle a complex waste stream that previously would have been landfilled but is now a useful raw material resource.”

Roger Morton, Axion Director, added: “Resource recovery businesses such as ours have an important role to play in the transition to a Circular Economy. Rebecca was very interested to learn about our developments at Salford and recruitment of a significant number of local people, including graduates from Manchester and Birmingham Universities.”