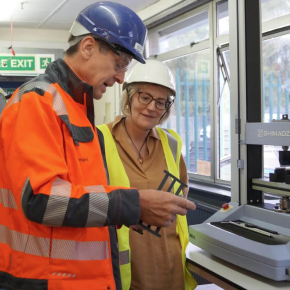 Axion Polymers recently hosted a fact-finding visit at both of its Manchester recycling facilities for the Lead MEP and appointed Rapporteur for drawing up regulations on persistent organic pollutants (POPs).

Julie Girling, MEP for South West England and Gibraltar, viewed the in-depth processes that extract plastics from end-of-life vehicles at Axion’s Trafford Park and Salford sites during her tour this month.

Invited by Keith Freegard, Axion Polymers Associate Consultant, she found out how Axpoly® recycled polymers, derived from automotive shredder residue and electrical end-of-life feedstocks, are extracted and processed for use in a whole host of new items, from drainage and ventilation products to vehicle components. 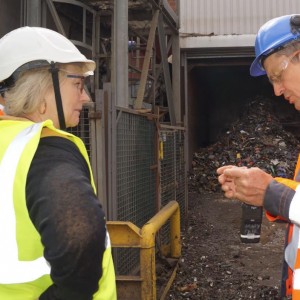 Plastic extracted from end-of-life vehicles at the Trafford Park facility is further refined at the Salford advanced processing plant.

There is concern among plastics recyclers in regards to a European Parliament proposal to set a concentration limit of 10ppm for the flame retardant decaBDE in substances and products which may negatively impact the recycling of plastics from vehicles and electronic equipment.

“But I think that’s only going to happen by ‘demand-creating’ legislation which rewards manufacturers who demonstrate much higher levels of recycled plastics in their products; then we will see duplication of the type of plants that Axion has developed.”

An ongoing study by a joint working group aims to define the position of the EU on this low POP content trace limit value.

The safe limit values for both waste plastics and products made from recycled polymer under the UN’s Stockholm Convention are yet to be agreed.

The next Conference of the Parties of the Stockholm and Basel Conventions will take place during 2019 where a decision is expected.

Julie, who has been dealing with recycling legislation for 10 years in her role as an MEP, said: “The tour was really interesting; it’s important that these companies are supported.

“I’ve gained further understanding of how recycling works in practice and the implications of increasing plastic’s recyclability to prevent it from ending up in the oceans.

“There’s no reason why one piece of plastic waste from Europe should be in an ocean anywhere.

“But in order to prevent that we have to make significant investment in developing our European recycling business and we’ve been discussing the different pieces of legislation that go towards that; some of which is very important to Axion’s business.

“Recycling is something that we all want to do. Not many people are prepared to accept that it’s expensive, requires a huge amount of capital investment and the payback has to be given some certainty and the only way to do that is through legislation, which is why we need to discuss the content of the legislation in some detail.”