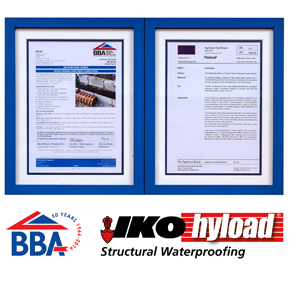 The British Board of Agrément has reissued its first certificate to IKO Hyload as part of its ongoing 50th anniversary celebrations.

Hyload Damp Proof Course (DPC) was first certified by the BBA in 1967, shortly after the organisation was established. In the past 50 years, BBA certification has remained a symbol of excellence and reassurance, as a third-party, independent guarantee of performance.

The IKO Hyload Original DPC system is still a popular choice with specifiers today. The robust solution is suitable for an array of building types including traditional brick/block, SIPs, concrete frame, steel frame, low-rise and high-rise.

The polymeric damp proofing material is typically used as a damp proof course to prevent rising damp, but can also be used as a site-formed cavity tray material above any elements in the wall that bridge the cavity e.g. lintels, brickwork support angles, fire barriers etc.

The DPC provides an effective barrier against water and water vapour and is designed to remain fully operational for the lifetime of the building.

The British Board of Agrément’s head of approvals for construction products, John Albon, commented on the reissue: “IKO’s continued development of its Hyload Damp Proof Course system has ensured that BBA Agrément Certification has been maintained since the issue of the original Certificate in 1967.

Hyload has of course evolved over the years – to keep up the changes in Building Regulations and Standards – and we look forward to celebrating the 50th anniversary of continuous BBA Certification for this product next year.”