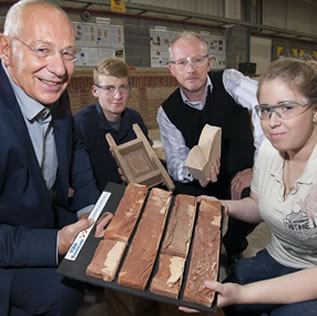 Working alongside the Association of Brickwork Contractors, the BDA is working to increase the number of skilled bricklayers working in the construction industry and drive the study forward.

Bricklayer numbers at all time low

The percentage of skilled bricklayers working across the country is at an all time low following the 2008 recession and has had a slow turn around during the industries growth and recovery process.

More apprenticeship schemes are needed to fill the void across the brick industry and help to avoid a fall in output as the call for further house building increases.

Supported with funding from the Construction Skills Training Board, the initiative aims to raise awareness of the brick industry and the contribution it makes to the Built Environment.

The roadshow aims to encourage people to become bricklayers

A number of colleges throughout the country will be holding workshops and presentations by the BDA, brick manufacturers and contractors, giving students the opportunity to access informative technical guides and demonstrations.

Formally dubbed #LOVEBRICK on Twitter in order to get youngsters involved in the scheme, the roadshow will tour Britain to encourage people to learn the skills of bricklaying.

It is hoped that a number of people will sign up for training in the aftermath of the roadshow, allowing for an increase in brick laying jobs and the number of homes being built to help meet national targets.

A total of ten colleges will be participating in #LOVEBRICK 2014, with further presentations and demonstrations being scheduled to take place in 2015.

The BDA represents brick industry professionals throughout the UK and Ireland to ensure that clay brick and pavers are recognised as the material of choice by architects, engineers, planners, specifiers, developers, landscapers, builders and property owners.