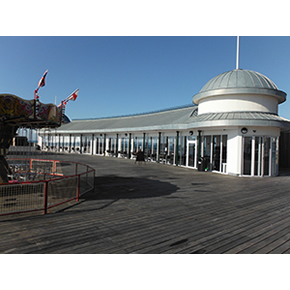 Heat Mat has supplied electric underfloor heating to Hastings Pier as part of a £14.2m refurbishment.

The bespoke EUH was installed beneath the expansive floor of the Pavilion Restaurant & Bar by electrical contractor Premier Electric. The system was specified and supplied after load calculations revealed that a traditional wet system would prove too heavy.

The EUH is made up of 3mm heating cables and 160W heating mats, laid in several zones which are thermostatically controlled by three Heat Mat NGTouch colour touchscreen thermostats. In addition to the underfloor heated main open area, a toilet and kitchen pod, dry store and staff changing rooms were fitted as part of the scheme.

The final planking at the historic Hastings Pier attraction was put in place at the end of February after a two-and-a-half-year rebuild following its closure in 2010 after a fire.