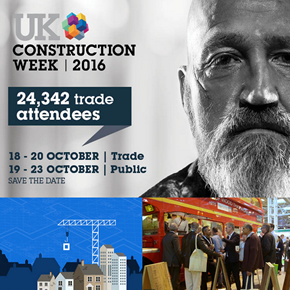 UK Construction Week will return to Birmingham’s NEC for its second edition, as revealed by Media 10

Following its success last autumn, UK Construction Week is set to return to the NEC on 18-23 October for its 2016 event. The show has signed up to 4 more years at Birmingham’s popular venue, demonstrating a commitment to the up-and-coming city.

Birmingham has ranked sixth in Europe’s list of top ten cities for property investment for the second consecutive year; it is the only UK city to be represented.

With companies such as HSBC relocating there, and an investment in HS2 on the cards, Birmingham aptly reflects the changing landscape of the UK property market.

For this reason, it was chosen to host UK Construction Week, which launched last year. Over 24,000 trade professionals visited the show to network, view the market’s latest products and contribute to debates on current industry issues.

The event’s main stage also featured a ‘Birmingham Development Forum’, where a number of Birmingham-based architects and industry professionals highlighted the unique opportunities facing the city as it ‘comes of age’.

UK Construction Week will return to Birmingham later this year; Media 10 is confident that it has found an ideal venue for the show, where the industry can be best represented for all.