Blogs » Brexit Briefing: Should we stay or should we go? 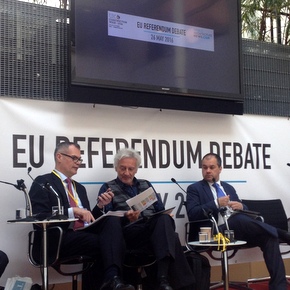 Brexit Briefing: Should we stay or should we go?

The WAN Brexit Briefing, in partnership with UK Construction Week took place early this morning on the last day of Clerkenwell Design Week. 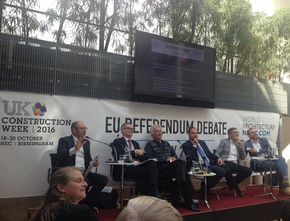 The event was led by a panel of experts from a cross-section of the industry. Together we looked at how the construction industry may be affected by the results of the EU Referendum that takes place on Thursday 23rd June.

The meeting, in the grand atrium room of the Grimshaw Architects offices was introduced by Nathan Garnett, Event Director of UK Construction Week and chaired by Brian Kilkelly, Development Lead, Climate-KIC and Founder, World Cities Network.

The survey indicated that two-thirds of Architects believe UK companies will be affected by the loss of EU funding by Brexit, and 42% of Engineers were concerned about major infrastructure projects such as Heathrow, HS2 and Crossrail 2 – only 14% thought Brexit would have a positive affect.

Over 50% of construction professionals believe that Brexit would exacerbate the skills shortage. However, 70% of contractors believe Brexit would strengthen the case for greater support for UK manufacturing from the UK Government.

The panel reviewed some of the vital issues affected by the referendum result including the skills shortage, inward investment, exporting & importing, the housing crisis, and infrastructure projects.

Brian Berry from the Federation of Master Builders said FMB members were complaining that there was too little real information to help them make a decision though there were real fears about Brexit exacerbating the skills shortage.

Architect Cezary Bednarski believed that most assessments about the consequences of Brexit were pure guesswork. However he felt the EU was like a lumbering elephant, not suited to taking advantage of the opportunities in the modern world.

Paul Scully MP reminded us that Antartica and Europe were the only continents not growing economically and Britain would better served improving links with other continents of the world where there was considerable economic growth.

David Cash said he would be voting ‘Remain’ because the recession that could follow Brexit would harm the construction industry just at a time when we are seeing growth.

Mark Middleton welcomed the peace and security within the EU and would also be voting ‘Remain’. He said we are not ‘shackled’ by the EU – we are not in the Euro or Schengen – but leaving would mean negotiating complicated new trade arrangements.

There was an extensive and useful Q&A session.

A show of hands at the end of the event indicated that the majority at the briefing would still be voting ‘Remain’ on the 23rd June.