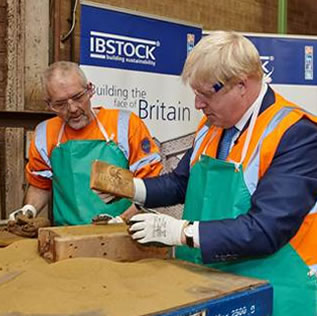 Following a visit to Ibstock Bricks Chesterton factory on Monday, Boris Johnsons highly talked about brick promise was the hot topic on everyones lips at this years Conservative Party Conference in Birmingham.

The Mayor of London called for affordable housing during the Conservative Party Conference. Photo courtesy of Ibstock Brick.

Holding up a brick presented to him at the Newcastle under Lyme site, Boris promised the brick You will not be alone, whilst stating that a billion more would be needed to build new homes in London over the next 10 years.

The Mayor of London told the audience that the new factory was hiring people and firing bricks to build the homes that people need, and to help them on to the property ladder.

With 400,000 new homes needed in London, huge resources and building materials will be required, he said, as a way to emphasise how Londons growth benefits other parts of the country.

Following an investment of more than £22m, the brick factory, which is the most energy efficient of its type in the world, has been credited for creating 80 jobs and for helping to meet the increased demand for bricks across the whole of the UK.

The extension work has allowed Ibstock to boost its annual production by 125 million bricks  equivalent to 15,000 extra homes, and the firm is set to bring an additional 160 million bricks to the market by the end of 2014.

As Communities Secretary, Eric Pickles launched a £400 million Rent to Buy programme last week to encourage the construction of rental homes across Britain, the demand for bricks is constantly increasing.