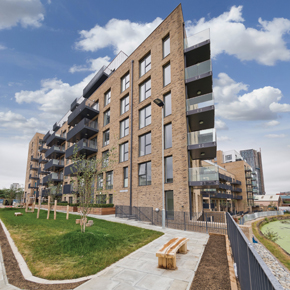 Nexus brick-faced soffit systems and lintels have been specified for use in the Bow River Village development, which sought a traditional aesthetic solution for its commercial and residential buildings.

Bow River Village is a mixed-use development, located on the outskirts of London’s Olympic Park.

Situated on a previously derelict industrial site in Tower Hamlets, the development offers commercial space and over 200 homes – private, shared ownership and rented – in four individual brick buildings, which vary from six to nine storeys.

Considering the location’s industrial heritage, Frank Reynold Architects specified brick to ensure that the new builds coordinated with the surrounding buildings. The team aimed for a traditional ‘Victorian Warehouse’ aesthetic, to complement the character and appearance of the Grade I listed House Mill, which sits opposite Bow River Village.

The Nexus system – a comprehensive range of brick-faced soffit systems and lintels – was specified for use in the development. Developed by Ancon, in conjunction with Ibstock Kevington, the system offers a facade solution approximately 70% lighter than traditional cast concrete systems.

A complete soffit and lintel solution was created for the Bow River Village development. Nexus soffits of 215mm deep were used above doorways, fastened directly to Ancon MDC brick support angles. Elsewhere, stretcher bond lintels were used at each window head; they were specially manufactured 150mm longer to ensure perfect alignment with the main facing brickwork.

Several ‘special’ soffit units, featuring facing brickwork to all four sides, were designed and fixed to the brick support systems, which were pre-fixed to the structural steel frame to create deep ‘flying beams’ above the buildings’ upper storey stairwells.

The project’s brickwork contractor, Flahive Brickwork, was able to fit the Nexus units without the need for mechanical lifting equipment. With a successful delivery schedule of 25 units per day, Ancon and Ibstock Covington were able to meet the project’s strict targets and adhere to time constraints set by the clients, Southern Spaces and Southern Housing Group.