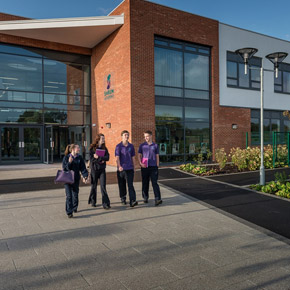 Piatto Block paving from UK manufacturer Brett Landscaping has been used on the external grounds of Sarum Academy in Salisbury as part of a £15.5m redevelopment scheme. The vibrant and modern Piatto paving was combined with classic Omega and Omega Flow rectangular blocks to create a variety of patterns which complement the contemporary lines of the school itself. 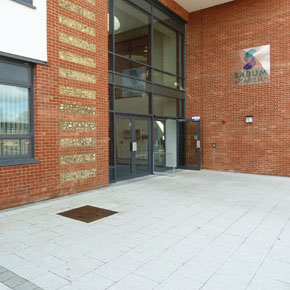 The resurfacing project is part of a wider renovation scheme that began in April 2012, after it was determined that the school’s original 1950’s buildings were considered ‘no longer fit for purpose’.

The decision was made to completely rebuild the school, and the redevelopment was completed in July 2013, resulting in a new-look, modern architectural style that required complementary hard landscaping, with architect consultancy Illman Young assigned to the task.

Illman Young designed a complementary paving scheme which was structurally capable of withstanding heavy footfall on the school’s footpaths, roadways and courtyard areas. The architects suggested that Brett Landscaping products be used in the school’s Contractor’s Proposal.

Anthony Spencer, Civils Sales Manager at Brett Landscaping commented: “Piatto is suitable for all types of urban and commercial hard landscaping projects. It has a beautiful aesthetic, and yet is extremely durable – making it an ideal installation for school environments where footfall can be intensive.”

For the school’s new pathway design, Omega and Omega Flow paving was recommended, as the blocks can be laid in a variety of different patterns including 45˚ and 90˚ herringbone whilst providing a thickness of up to 80mm to support high levels of traffic.

Omega Flow permeable paving also allows rainfall to permeate naturally between the paving blocks into a permeable sub-base as part of a SuDS solution designed to prevent flooding.

A total of 1600m2 of Omega Flow was eventually ordered, in addition to 800m2 of Omega Charcoal and Natural and 600m2 of Piatto.

Dawn Higgins of Sarum Academy concluded that the school was ‘extremely pleased with the finished result and how beautifully the Brett Landscaping paving materials blend into the modern and innovative new environment’.