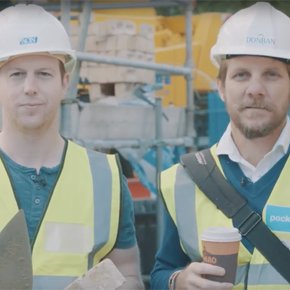 Bricks vs clicks: Is it quicker to build a wall or a website?

It’s an age-old question: can a bricklayer build a wall faster than a website designer can build a website?

With the shocking news that neither made the top 15 list of dating app Tinder’s most right-swiped jobs, we thought we’d offer both brickies and techies a chance to claw back some prestige.

On a relatively clear day on a construction site in central London, standing in their respective corners were Adrian, a bricklayer, and Robin, a website designer. Adrian’s task: build a brick wall. Robin’s challenge: build a website, from domain registration to go-live, faster than Adrian can build his brick wall.

Decked out in hard hats and hi-vis vests, our contenders were invited to select their weapon-of-choice. Adrian grabbed a trowel. Robin, a laptop. Then each got to work — bent under the weight of expectation, wiping sweat from furrowed brows as the clock ticked away, pausing only for a cup of tea and a chat. Suddenly it was over. Robin, the web designer, was victorious, having built a complete website in two hours, 51 minutes and three seconds.

Despite appearances, the point of this exercise was not to engender an epic rivalry between bricklayers and web designers. It’s to show how easy it is to build a website, following research that found tradespeople in the UK miss out on around £16k a year by not being online.

The research, conducted as part of the tradebetteronline.uk campaign, offers some important insights for tradespeople looking to increase their earnings. Bricklayers like Adrian could generate an extra £7,650 in leads a year from being online, yet 39% of them don’t have a website. Other trades show an even greater financial opportunity: electricians, for example, can generate an extra £23k a year from being online — but 33% still don’t have a website.

There are also major regional differences in the proportion of tech-savvy tradespeople. In Glasgow 74% of tradespeople have a website, compared to a paltry 53% in Leeds.

Across all trades, those with a website pick up an average of 21 extra jobs per year. These extra jobs are worth an average of £790 each, meaning that a typical tradesperson could earn an extra £16,590 a year, simply by setting up a website.

In the past, relying on word of mouth, repeat business or traditional advertising might have been enough. But today, an incredible 85%* of people in the UK will search online to find a local tradesperson. This mirrors the massive online shift in how we seek and share information, and purchase goods and services. In Britain in 2015, 78% of adults accessed the internet every day, or almost every day. That’s 39.3 million people.

And yet overall, 35% of UK tradespeople still aren’t online. Many don’t realise just how easy and cheap it can be to set up a website. Twenty-four percent of those surveyed said they wouldn’t know where to start, while one in ten worried about the cost. In fact, a simple website setting out the name of a business, what it does, contact details, and areas served can be an extremely quick and cost-effective way of making a good first impression on potential customers.

Back onsite in London, Adrian, our bricklayer, himself confessed surprise at the competition’s outcome: “I didn’t think I was going to lose that one… Maybe building a website is easier than building a wall.”

And web designer Robin agreed. “It shows you how easy it is to build a website — even if you are on a building site.”