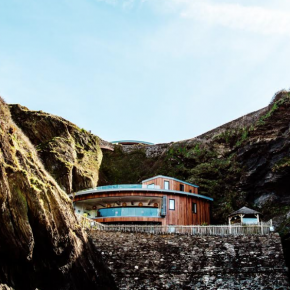 Brio, the UK’s leading supplier of folding door hardware, has made a big contribution to an architecturally adventurous purpose-built wedding venue in Devon.

A series of four tunnels were originally carved out of the solid cliffs in the 1820s, giving access to the coves and beaches – and tidal pools for seawater swimming; known as Tunnel Beaches.

Now the Ilfracombe site includes Devon Beach Weddings, which can cater for 160 guests and is set on the beautiful, coastal landscape.

Brio’s Weatherfold 4s folding and sliding door hardware made an adventurous curved door project a reality for the site. Weatherfold 4s was chosen for its smooth and easy operation, plus resistance to this environment, with the sea being highly corrosive.

The project also utilised Brio’s new 286 Dual Point Lock, which unlocks the top and bottom with a single action. This hardware upgrade improves functionality and visuals, with the doors using a reduced amount of visible hardware. 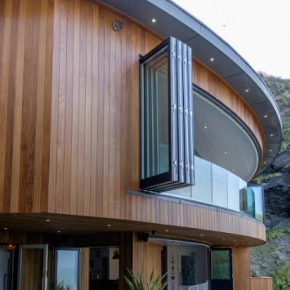 David Newton, General Manager of Brio UK, commented: “Our Weatherfold 4s products are built to be extremely robust with a rugged construction that is eminently suited to the extremes of the British weather as well as achieving PAS24 and Secured By Design accreditations.

“Architects, specifiers and manufacturers can rest assured that when they choose Brio Weatherfold 4s non-mortice hardware for their projects they are working with a quality product that will not let them down and deliver many years of use.”

“Enabling better ease of use for the less able as well as aesthetic considerations led to the advent of the 286 Dual Point Lock which has been developed as an optional alternative to using flush bolts on panels.

“The lock is less intrusive than flush bolts and has the very considerable advantage of eliminating any bending down or reaching up to lock or unlock the door which is the downside of flush bolts.

“This makes it very friendly with regards to disabled access as wheelchair users will not have to rely on help to open doors.”

As with other Brio products, impressive style meets systems that are built to last. Brio offers an unbeatable 10-year warranty on all Weatherfold 4s hardware.