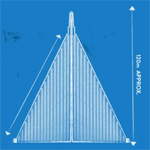 The Pyramid of Death

The Pyramid of Death

Proposed by Thomas Wilson in 1829, the Primrose Hill mausoleum was designed to tackle London’s lack of burial space.

Approximately 120 metres tall, the Egyptian-style pyramid would have been able to house 5 million corpses.

To Wilson’s disappointment, public opinion stopped the project from going ahead. Authorities also doubted his claim that the building would have raised a £10 million profit.

In awe of Paris’ iconic Eiffel Tower, Sir Watkin was keen for London to benefit from a similar landmark.

He invited Gustav Eiffel to design an English equivalent but the patriotic Frenchman rejected the offer.

However, still eager for the construction of his ‘Great Tower of London’ to go ahead, Watkin held a design competition.

The first 47 metres of the winning design, which was put forward by Stewart, McClaren and Dunn in 1890, was built in Wembley Park but after Watkin’s death, financial troubles and unsteady foundations resulted in the tower’s demolition.

In 1904, John Pollard Seddon and Edward Beckitt Lamb suggested that a tower should be constructed to house the monuments that were overcrowding Westmister Abbey.

The building would have been too expensive to build so the plans were scrapped.

Other architects were also critical of its proposed size at 167 metres tall.

The cathedral, proposed by Sir Edwin Lutyens in 1929, was to be taller than St. Peters and twice the height of St. Paul’s.

It was designed to stand out with a distinctive colour scheme: grey-pink brick and silver-grey granite were to be used.

However, the outbreak of the war halted the development and when Luytens died in 1944, it was never continued.

The crypt was the only section built.

Designed by Future Systems in 1990, the energy-efficient skyscraper would have stood in Battersea at 442 metres tall.

However, many considered its design to be inappropriate: comments on its phallic appearance led to the cancellation of the project.

The situation wasn’t helped by the photovoltaic cells that were to form a rib around the building’s facade.

The Fourth Grace was designed by Will Alsop as part of Liverpool’s European Capital of Culture 2008 bid.

The building was to sit alongside the ‘Three Graces’ on Liverpool’s harbour.

The project was cancelled by the council due to ‘spiralling costs’; however, many believe that the negative reaction of the locals may have influenced the decision.

After the development’s cancellation, Alsop also accused the council of deception.

Find out more about the world’s fascinating unbuilt buildings