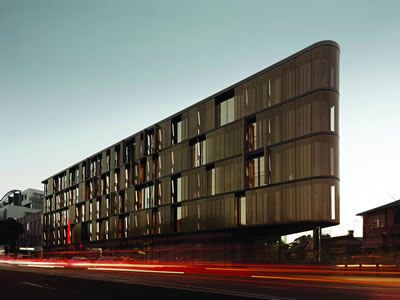 With 4.1 million inhabitants, Melbourne is Australias second-largest city  and is known as the city that never sleeps. The 140 different cultures living there make it a centre of cultural exchange. In architectural terms, too, it embodies this diverse mix, with highly modern design meeting listed buildings.

Warm bronze colour, austere coolness
The architects Elenberg Fraser have made a name for themselves on the Australian architectural scene. Inspired by the natural environment, they aim to develop projects that perfectly suit their respective requirements, are open to interpretation and stimulate all the senses. This is why the work of the architectural duo does not comply with rules, symmetries or conventions  instead they focus on environmentally friendly design that recreates nature.

Once again, the architects have set new standards with the most flamboyant project in St Kilda, the Luna Apartments. The five-story apartment block with restaurants, shops and 72 one and two-room apartments reflects the positive mood in the city  a touch of glamour, a certain holiday flair and lots of charisma. With around 7,000m2 of floor space, the building is marked out by its extravagant design. Like a bronze arrow, the complex blends in perfectly with its surroundings.

The building  is lent its sense of almost floating lightness by the rounded point supported by just one pillar on the ground floor. A key characteristic of the Luna Apartments is the bronze skin wrapped around the building like a veil.

Privacy and solar protection elements made of bronze-coloured anodised aluminium mesh underline the puristic impression given by the clear lines and have an almost magical effect through their interaction with light. The glass behind the mesh also shimmers in bronze.

Between reality and fantasy
For this extraordinary design, the architects were inspired by the world famous Star Wars films. They designed this futuristic building as a homage to Princess Leia. Through the interplay between fully covered curved sections and parts of the building that reveal an appealing and very feminine metallic bronze bikini look, the apartment block reflects Leias unearthly appearance in both form and colour. This versatility also reveals itself in the building shell: partially covered, partially open to the outside  however the residents please. This variability of intimacy and openness is made possible by moveable privacy and solar protection elements as well as special lighting technology. If the resident uses the lighting inside the room, the apartment is visible from outside. If, however, they use the exterior lighting which illuminates the room just as brightly through the fully-glazed, reflective front, passers-by see nothing more than a shining bronze façade while the resident, protected from prying eyes, can observe the street below.

Solar protection shell unites fantasy with reality
This effect is supported by the sun protection façade made of ALU 6010 bronze-coloured aluminium mesh from GKD. The edges of all mesh panels were folded around the frame, thus creating a seamless, bronze veil that unites fantasy and reality. The panels were anodised in an immersion process. 289 solar protection elements with different widths  some fixed, some manually foldable  give the building its striking appearance. In total, around 600m2 of mesh seamlessly encase the building, providing a pleasant environment for residents and visitors and ensuring energy efficiency through selective and targeted shading while, at the same time, offering a high level of transparency. With an average of around nine hours of sunshine per day in January, the rooms would heat up very quickly in the southern Australian summer. However, the semi-transparent metallic mesh skin provides reliable protection from direct sunlight while allowing daylight to stream unhindered into the building.
As such, costs for the energy consumption of air conditioning units and additional lighting are drastically reduced.

The success of woven wire mesh in architecture is also due to its optical and functional properties: reflectiveness, transparency and opaqueness, flexibility and robustness, permeability to light and air, practically unlimited service life, ease of cleaning, recyclability and functional protection against the sun, draughts, impacts and above all against blast waves and flying fragments from bombdetonations.