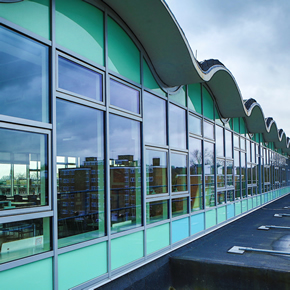 Prater has developed and supplied an environmentally-responsive building envelope for the refurbished Ark Putney Academy.

The original Elliott School, which is located in Putney, West London, was designed by the London County Council’s Department of Architecture in the 1950s. Over time, the complex deteriorated: problems with heating, cooling and ventilation persisted all year-round, and the classrooms were showing signs of dilapidation.

Working in conjunction with Lendlease and the London Borough of Wandsworth, Hawkins\Brown remodelled the school: now known as Ark Putney Academy, it provides a contemporary learning environment for all students.

Prater was appointed to work on the redevelopment project. As part of its involvement, the company designed an environmentally-responsive façade for the school’s main building. Featuring 4,000 square metres of curtain walling from Schueco, the system was developed to control the building’s temperature, providing energy management and improved insulation.

The glazing also allows natural light to enter the classrooms, creating a stimulating, bright environment for learning. Prater installed the building façade, along with 1,000 square metres of SFS Steni Colour Rainscreen to the new sports hall.

Curtain wall elements were integrated into the main façade, with curtain wall screens connected back to the floating staircase landings, which are Grade II Listed.

In addition, Prater also carried out roofing work. In partnership with Bemo, it fitted 800 square metres of acoustic standing system roofing to the barrelled sports hall roof. Sika Sarnafil single ply roofing was also installed to the sports hall link and canopies, as well as the DT block.