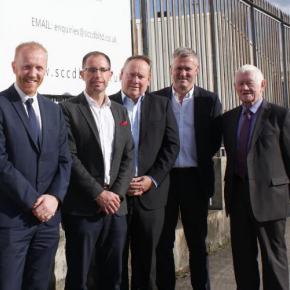 SCC Design Build have announced it has recently enjoyed its busiest ever trading period.

They specialise in the production of precast concrete solutions, supplying products for a range of projects, including student accommodation to multi-storey car parks and hotels to high-rise tower blocks.

Company directors say the last six months has been its best trading period, with revenues in this six-months surpassing any previous financial year.

Commercial Director Jim Durkan reflected on this growth, saying the company has recorded a big rise in the enquiry numbers being received from architects and main contractors.

“Analysis of the figures shows that student accommodation builds, and the leisure sector are particularly active for us and there has also been an increase in work for major residential builds,” he said.

“What’s also interesting is that customers are partnering with us ahead of other suppliers because we can provide a bespoke made solution; and also due to the fact that we can produce everything on one site.”

Concrete is naturally fire resistant, a particularly sought after quality following the Grenfell Tower tragedy, and is much less susceptible to corrosion that its steel alternative.

Pre-cast concrete also means much of a project’s construction can take place off-site, making the process both quicker and cheaper.

Jim reflected on the rise in enquiries about architectural concrete.

“Architectural concrete can be moulded into virtually any shape and can take on a variety of colours.

“Today we can see great variation in our cities’ skylines and architects are increasingly eager to create buildings that are visually interesting and reflect the character of their area.

“The versatility of architectural concrete supports and enables this level of creativity.

“At SCC we’ve seen a recent surge in architectural concrete enquires and believe this marks a regeneration in the material’s popularity.”