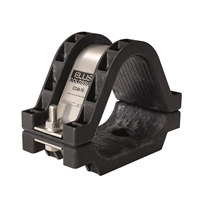 Based in Australia, Ausgrid is a prominent power provider. It has recently submitted an order for Ellis Patents’ Colossus cable cleats.

Colossus has been designed to secure power cables in trefoil formation, a solution that was highly sought after by Ellis’ customers.

The cable cleat is currently being installed in a 132kV underground feeder power tunnel, which is being built between Sydney’s suburbs of Willoughby and Lindfield.

The cable cleat has been developed for use by the transmission and distribution and utility markets. It has been short circuit tested to a level of 104kA peak.

Made from 316L stainless steel and LSF Zero Halogen polymer, Colossus is available in 14 different sizes, which are suitable for cables from 24mm diameter to 170mm.

A saddle version of the product has been developed for all cables over 69mm, offering an additional 100mm of protection to both sides of the clamp.

Colossus’ base can be fitted directly to a structure prior to cable installation, meaning that the cables can be laid directly on to it. The over strap can then be installed separately.