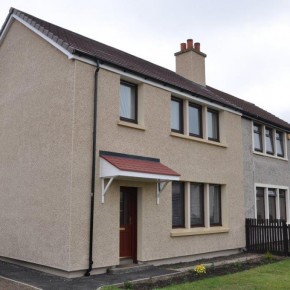 Many buildings, particularly those constructed during the 1960s and 1970s, suffer from inadequate thermal insulation, significant thermal bridging and subsequent condensation problems.

Over time the deteriorating fabric leads to a gradual reduction in structural effectiveness, especially at construction joints and junctions between components. 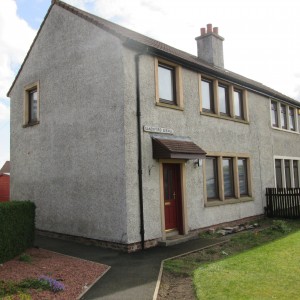 The post-war house before SEWI was applied (after above).

This can be complicated by poor concrete cover and/or chloride contamination which leads to corrosion of reinforcement in the structural elements. Weather tightness may also be severely reduced.

Structural External Wall Insulation (SEWI) provides a cost effective method of extending the life of a defective property – which might otherwise have to be demolished – while improving its external appearance and thermal efficiency.

SEWI also offers major advantages over other remedial solutions as installation is carried out off-site, allowing residents to remain in their homes during refurbishment.

It can be used for over cladding non-traditional, no-fines concrete and defective housing (both low and high), reconfiguring building façades, enclosing balconies or walkways and forming new or existing parapets.

Falkirk Council has recently used SEWI to extend the lift of 20 non-traditional Cruden properties in the Whitecross area of the city.

Having previously used Structherm external wall insulation systems on past refurbishment projects, the council once again specified SEWI for the project.

A lime-based render was applied whilst wet pebbles were thrown onto the surface to provide weather protection and timber frame and plasterboard were used for the inner leaf.

In addition a small amount of glass fibre insulation was installed between the frame studs.

As they age the protective render of these properties often cracks, leading to water ingress. This can cause severe corrosion to many other parts of the metal frame. Other problems include bowing of the external concrete and poor thermal performance of 0.77W/m2k, which leads to high fuel costs.

SEWI helped bring the homes up to current Part L Building Regulation standards in relation to thermal efficiency and improve the external appearance.

Each SEWI panel consisted of a stainless steel wire space frame with an 80mm Phenolic insulation core. The type of insulation used depends on the U value required, but generally it is either mineral fibre, polyisocyanurate (PIR) or enhanced expanded polystyrene (EEPS). This greatly improves the thermal performance of the building, reducing both CO2 emissions and on-going energy costs for residents.

The panels are attached to the existing building using special fixings and then joined together with mesh to provide a rigid, continuous envelope that offers complete structural integrity without the need to alter foundations or drainage.

A substantial layer of basecoat render is then applied, which works with the panels to provide a high degree of strength and an impact resistance of 10Nm. At Whitecross, a fibre reinforced basecoat render 14-16mm think was applied followed by 8-10mm of dash receiver and a decorative dashing aggregate.

The use of SEWI has enabled the houses to be insulated without applying any additional loads to the weak outer leaf. The thermal performance has greatly improved with the U value of the walls dropping from 0.77W/m2K to 0.22W/m2K.