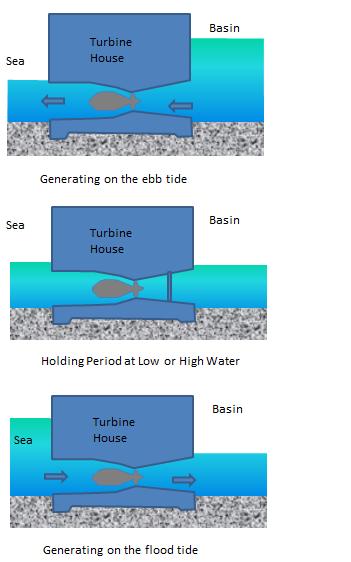 From the artists impression of the lagoon we can certainly imagine the impact on tourism in the area, with the wonderful walks, bike ride and sailing regattas. But some question an energy-generating lagoon on this scale is truly economic.

What is a tidal lagoon?

A tidal lagoon is a man made harbour type of structure that closes off a tidal sea area and incorporates hydro turbines through which the sea moves to generate electricity. [see image]

The Severn Estuary holds the second highest tidal range in the world and within this Swansea Bay benefits from an average tidal range during spring tides of8.5m.

What would be built?

The worlds first, man-made, energy-generating lagoon, with a 320MW installed capacity and 14 hours of reliable generation every day. This would provide clean, renewable and predictable power forover 155,000 homes for 120 years, saving over 236,000 tonnes of CO2 each year.

What is the long term vision

The Tidal Lagoon at Swansea Bay could put the UK at the centre of a new multi-billion pound sector in green power. Tidal Lagoon Swansea Bay says this project will be a proof of concept and they plan to build five other much larger lagoons around the UK each with 60 turbines. If all six lagoons are completed they could provide 8% of the UKs power requirement.

Join in the debate

Some challenge the economic viability of tidal power and point to the French experience of the tidal power station built in Brittany in 1966. The outcome was so disappointing that they did not continue with more tidal power. Why did the French stop building tidal projects?

Others believe the technology has moved on and we need to factor in the leisure/sport facilities that will be created with this tidal lagoon. It is a far more attractive project than wind power.

Would it not be possible to have a continuous boom around the whole coast, not far below the surface, allowing the passage of vessels and not detracting from the views, while generating power by the constant movement of ebb and flow close to the shore? It would rely on cabling rather than superstructures and could be shut down for maintenance/repair etc in isolated sections.