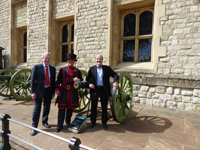 Le Guebre – The Fire Worshipper, was originally cast in 1813 in Metz, bearing Napoleon’s monogram on the barrel. Waterloo’s sponsorship has enabled a complete restoration of the cannon which is now re-displayed outside the Waterloo block at the Tower of London, coinciding with the official Anniversary on the 18th June.

Le Guebre Cannon or, The Fire Worshipper, outside the Tower of London

Artillery was used extensively at Waterloo. After the battle much of the French artillery would have been taken as trophies by both the British and the Prussians.

Many pieces were melted down for the bronze on Nelson’s Column in Trafalgar Square, and the huge equestrian monument to Wellington which now stands adjacent to The Royal Garrison Church of All Saints, in Aldershot.

In 1827, as constable of the Tower of London, Wellington ensured the preservation of the remaining captured Waterloo guns which form part of an extensive collection held by the Royal Armouries.

Rick Edmondson, Chairman of Waterloo, commented: The battle was a pivotal event in the 19th century and is associated with the laying of foundations for European co-operation.

Waterloo has a like-minded approach with the way it runs its business by collaborating and developing relationships, we ensure that projects run smoothly and add benefit for our customers.

He added: Waterloo is proud to play a part in the centenary commemorations. Most of the soldiers came from Kent and the fact that our company is headquartered here is a poignant reminder. We are delighted to have made a contribution to preserve one of the few remaining cannons, which can be enjoyed by future generations.