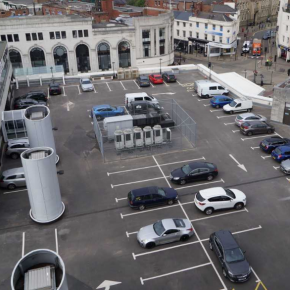 The remodelling of Wolverhampton’s Mander Centre has featured the resurfacing of the entire roof-top car park, with help from IKO products.

The Mander Centre wished the project to be entirely carbon neutral, which led contractor Rio Group to specify the IKO Permapark system, the sole product for waterproofing and surfacing that can be totally carbon offset.

Rio Group also chose IKO Permascreed as a stable base for the waterproofing, meaning there was no need for a separate vapour control layer.

IKO Permascreed is designed to provide drainage falls and can be trafficked or covered as soon as it has cooled to ambient temperature.

Approximately 1,350 tonnes of old mastic asphalt was removed from the car park and replaced with IKO Permapark.

Radflex expansion joints were installed to accommodate movement in the car park deck.

With safety obviously paramount, the work was mainly conducted at night, as the car park remained open to shoppers throughout the daytime.

IKO’s purpose-built asphalt luggers guaranteed all hot materials were transported safely in sealed units to the point of laying, with flashing beacons to persistently warn people of possible hazards.

Ian Deacon, Managing Director of Rio Asphalt, said the IKO Permapark system was ideal, as the waterproofing membrane could be applied directly onto IKO Permascreed after just an hour.

This guaranteed the shopping complex was kept waterproofed from the outset, which is not always achievable with alternative materials, for which a longer drying period is needed.