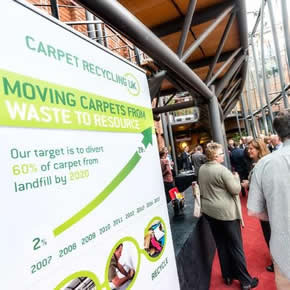 Carpet Recycling UK will be moving its 2016 Annual Conference and Awards Event to a new venue: the event is scheduled to take place at Leicester City Football Club on June 29th.

Taking inspiration from Leicester City’s success in the Premier League, Carpet Recycling UK will be celebrating the achievements of individuals and organisations, who have advocated greater sustainability in resource recovery from carpets.

Sponsored by Invista, the one-day conference will offer networking opportunities for manufacturers, contractors, recyclers and local authorities, as well as designers and architects.

Important topics, such as take-back schemes, energy recovery and waste prevention and redesign, will be discussed at the conference. Carpet Recycling UK’s annual awards event, which is now accepting entries, will also take place at the end of the day.

The four award categories are: Reuse Member of the Year, Recycler of the Year, Take Back Partner of the Year and Recycling Champion. Meanwhile, a panel of experts will decide on the winner of the Outstanding Achievement Award, and the Award for Longstanding Support & Commitment.

The awards ceremony will be hosted by Oliver Heath, an architect, designer and regular presenter of seminars on sustainable homes and lifestyles. Having recently completed an environmental refurbishment of his own Brighton-based home, Heath shares Carpet Recycling UK’s sustainability values.

The importance of carpet recycling

Carpet Recycling UK was founded by several companies – including Desso, Cormar Carpets, Milliken and Marlings – in 2008. It aimed to tackle the 400,000 tonnes of waste carpet, which was arising annually in Britain.

Last year, the company recorded a 31% landfill diversion rate, after 125,000 tonnes of carpet were successfully recycled, reused or recovered for energy.