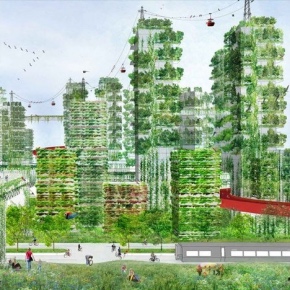 In a direct response to China’s growing smog and pollution problem, the government has come out claiming that they plan to erect two ‘vertical forest’ towers, one of which will be used as a hotel. The radical transformation has come about due to their ever-increasing greenhouse gas emissions. With plans for the first tower to be built in Nanjing, the buildings with have more than 1,100 trees and 2,500 lush plants grafted into their skeletons.

It’s said that a series of alternating ‘green balconies and tanks’ will also form part of the construction. In essence, the aim of these innovative project is to oxygenate the air whilst absorbing around 25 tons of carbon dioxide per year.

The pioneer behind this concept, Stefano Boeri, envisions office blocks, homes, hotels, a museum and even a green architecture school, all stacked with a plethora of green shrubbery. Boeri doesn’t want to limit his idea however, he has also stated that he seeks to create entire ‘forest cities’ in China, in a desperate bid to save the city’s struggling eco-system.

“We have been asked to design an entire city where you don’t only have one tall building but you have 100 or 200 buildings of different sizes, all with trees and plants on the facades,” Boeri told the Guardian. “We are working very seriously on designing all the different buildings. I think they will start to build at the end of this year. By 2020 we could imagine having the first forest city in China.”

Boeri went on to compare his vertical forest idea to the concept of having a skin graft, in that his aim is to improve China’s worst areas with fresh skin, breathing a new life into previously decaying areas. One only has to look at the success his vertical forest concept has had in Milan, for evidence. His buildings not only absorb over 25 tons of CO2, but they also supply the surrounding areas with around 60kg of oxygen daily.

Although Nanjing’s skyscrapers will be the first of their kind in Asia, the concept is not alien elsewhere. Parkroyal on Pickering in Singapore for example, features more than 15,000 square metres pf waterfalls, gardens and plan terraces on its exterior. Helen Coffey reviewed the concept and stated: “It’s a hotel-in-a-garden, with four floors boasting balconies covered in lush greenery.”

These ‘living walls’ have also become popular in Paris, specifically Pershing Hall, where the central atrium of the hotel sees a colourfully laminated living wall, created by botanic Patrick Blanc. Similar concepts such as the ‘green sculpture’ can be seen on Lake Como, Italy and the living wall at The Rubens, London, which sees 10,000 herbaceous plants flourishing our of its south-west facing wall.

What these concepts hope to do is to convince other cities and even countries to adopt similar concepts, meaning that we would be striving towards a greener, healthier world. Not only will that mean that cities will become healthier, but it will also provide work for construction companies, which comes at a time where fears over Brexit’s impact on construction companies in Britain constantly loom.

Damian Teevan – owner of Mtveevanhire – fully supports this greener movement, claiming that that change “isn’t just good for Britain’s smaller construction industries, but it will provide much needed work elsewhere.”

Boeri does believe that Chinese officials are finally understanding that they need to start taking their pollution problem seriously, and therefore are starting to create more sustainable living quarters. What this means is that instead of erecting “huge megalopolises” they’re opting to design smaller settlements entirely formed out of green architecture.

Boeri’s closing statement put his idea into perspective, claiming that he sees his idea as simple, and not spectacular: “What is spectacular is the nature, the idea of having a building that changes colour with each season. The plants and trees are growing and they are completely changing.”

Despite the optimism surrounding Boeri’s vertical forests, he himself admits that it will take far more than a pair of tree-covered skyscrapers to sort China’s infamous pollution crisis. Only time will tell if these towering jungle constructs will be enough to halt our planet’s declining eco-system.