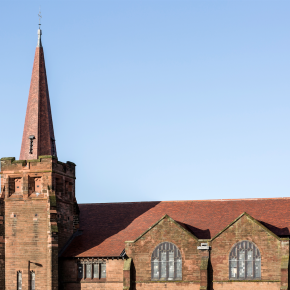 The Grade B listed church, dating back to 1904, recently suffered water ingress and rot in the clay-tiled roof and required replacement.

With the Heritage Lottery Fund making a large contribution towards the cost of the essential repairs; the architect in charge of restoring Rowan’s legacy, Peter Drummond, initially specified an alternative clay tile while DM Roofing lobbied to use BMI Redland’s Rosemary clay tile.

The project was not without its challenges, with two turrets at 14 and 3m tall. When McCabe inspected the roof, he found that the pre-formed arris hip tiles had been used originally were ‘specials’ and unavailable from stock at the angle required for the turrets. The tight re-roofing schedule meant that there was not enough time for these to be made to order so DM Roofing replaced them with a combination of Code 4 lead soakers and tiles that were individually mitred by hand.

Following this, another challenge presented itself in the form of a lead flat roof at the bottom of the turrets as the areas had rotted so much that the damage could be seen from inside the church. Consequently, the team had to reconfigure the sump detail to ensure this would not be an issue again.

The rest of the roof wasn’t without its issues either – as the existing tile details had no battens, it was difficult to level the new tiles with the old. The team, therefore, had to create mock panels and level checks had to be done to ensure the roof was both aesthetically pleasing and fit for purpose.

Some 175 years after that first Rosemary clay tile was formed, BMI Redland launched its Rosemary Clay Craftsman range, designed to give the look and feel of a handmade tile with all the strength and durability of a modern-day one. The tiles are characteristically aged with a textured surface, irregular distortions on the front edge, and varying hanging lengths.

Three versions of the Rosemary Clay Craftsman are available: Hawkhurst and Albury, which have a fine orange-red sanding over the surface and random black patterning to imitate a weathered look; and the Victorian, which is darker and has a grittier texture. The tiles are easy to incorporate with a host of compatible accessories and components that allow the tiles to be laid on a variety of roof configurations.

The tiles also promise great peace of mind, having met all the requirements of BS 5534: 2014 + A2: 2018 Code of Practice for Slating and Tiling, providing they are installed in compliance with Redland fixing recommendations.