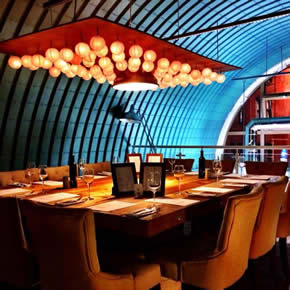 Renowned for its impressive feature lighting and stone baked pizza, the Herb Garden can be found in central Newcastle, beside the city’s Castle Keep and Central Station.

As it is located under a metal-clad railway arch, the restaurant has previously experienced a build-up of heat in the summer months. The site is restricted on internal fittings and has limited space for any plant, due to the listed nature of the surrounding arches, which are owned by Network Rail.

The owner sought a quiet, energy efficient heat recovery system with an unobtrusive finish; with planning restrictions preventing a fixture to the front of the restaurant, the solution had to be small enough to fit into a space at the rear of the building.

ADS Air Con was contracted to find and install an appropriate system, working around the restaurant’s opening hours. It eventually specified a two-pipe solution from Mitsubishi Electric, which could work around the building’s restrictions.

The company installed a single City Multi outdoor unit in an empty space to the rear of the building; the system will send heating and cooling to the indoor units, which have been fitted throughout the restaurant.

Whilst it was not possible to fix the internal air conditioning to the restaurant’s metal-clad ceiling, the team managed to mount a ducted fan coil on the roof of a storage room, to ensure the cultivation of air throughout the Herb Garden’s first floor VIP area.

On the ground floor, cassettes were suspended from the structure of the first floor; a ducted unit was mounted on the top rack, above an array of herbs and decorative lighting, in which the team was keen not to disturb.

Whilst offering quiet operation and cooling in the summer, the City Multi units will be able to heat the restaurant in the winter. As they could be installed and commissioned in different stages, ADS Air Con was able to successfully carry out the installation around the Herb Garden’s opening hours.